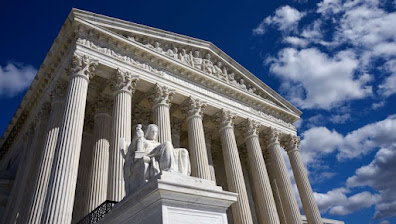 Today the Supreme Court will decide if 20 million Americans will lose their health insurance.

As these luminaries examine arcane laws that could somehow overturn Obamacare, they could care less about the effects of their decision on people's lives.

Thanks to the political creature that calls himself Mitch McConnell, the Supreme Court and numerous other federal court positions have been stacked with snakes from the Federalist Society.

Getting justice for all is going to be a constant battle against the forces that have infected our judiciary systems.

However, Joe Biden is now president giving Americans hope for a reversal of the damage that lawless GOP cronies have caused.

It's not going to be easy. But democracy has stood up to Trump, the biggest threat our republic has ever encountered. That's one giant step for the nation.

Wouldn't it be grand to see the Supreme Court stand up for all Americans?

One way or another, we're going to get a taste of what's coming our way from a court that badly needs credibility.

We'll have a good idea of how likely justice will prevail in the future when the court hands down it's decision.

Quote for the Day: "If the judges, who misuse the law, and make the wrong verdict, who else will judge such judges to support the justice to all without any distinction?" -Ehsan Sehgal