'Baby Trump' Is Going To Have To Recognize Reality Eventually 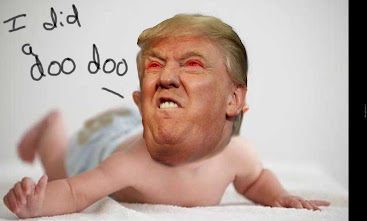 Our cry Baby-in-Charge is in deep denial.

He can't change reality regardless of his frivolous lawsuits. Some Republicans have begun to accept the inevitable and are trying to get Trump to stop whining by coddling the orange buffoon.

The royal ass wipes - you know who they are - are carefully coaching Donny to calm down. It's a herculean effort.

He doesn't want to admit he's a loser and they have to figure out how to get his fat ass out of the White House before January 20th when he'll be dragged out kicking and crying if he's still squatting there.

I don't envy his minions task. Changing his dirty diapers daily is one thing, but getting their terrible infant to vacate the White House is quite another.

Somehow, without riling up his rabid base, they have to figure out a course of action in the next 68 days.

Right now that mission seems impossible. Donny is angry and pounding his rattle on the resolute desk calling for heads to fall.

Their only hope is he'll be placated enough by firing everyone he doesn't like in government, and giving pardons to his criminal friends - and himself (if he can pull it off) that he'll leave.

To be sure no one - including Donny - knows what he'll do with the remainder of his regime.

Meanwhile, his enablers will also have to figure out how to keep him out of prison when he leaves office. They know the IRS has unfinished business with their baby Trump.

Quote for the Day; "It's human to be angry, but childish to be controlled by anger." --Mokokoma Mokhonoana