You Want Pathetic? Just Check Out These Trump Minions Response to Reality 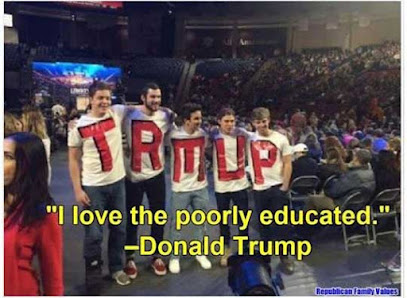 The fact that Joe Biden is our next president has caused already addled Trump supporters to melt down further.

--Trump's stupid son Eric tweeted this yesterday to his followers, "Minnesota Get Out and Vote!" The backlash on Twitter was he found himself the butt of countless jokes.

The reason for the scorn was obvious, voting was over in Minnesota a week ago.

--Donald Trump Jr. was brutally mocked yesterday for pushing a COVID-19 vaccine conspiracy theory. Junior claimed Pfizer's announcement of a vaccine after Biden was elected was part of a conspiracy to hurt his Dad's re-election.

Once again Twitter debunked that bullshit. It was pointed out that Pfizer's announcement fit it's timeline.

--Pompous ass Pompeo belittled voters when he announced there would be a "smooth transition" when Trump took office on Jan. 20th. His divorce from reality had world leaders puzzled and disgusted.

---Bill Barr pulled his head out of Trump's ass long enough to look into baseless claims of voting "irregularities."

--Trump's legal team was asked about a witness, Richard Hopkins who is a USPS employee who recanted his election fraud story. Nothing but silence. Busted again.

--MAGA nation is planning a reverse reality rally in Washington DC Saturday where MAGA tribes like the Proud Boys, and the Oath Keepers will attend. Their only aim is to create disruption and chaos.

--Dr. Scott Atlas, Trump's flunkie leading the Coronavirus Task Force, has been relentlessly attacking Dr. Fauci for telling the truth to the public.

--The Department of Homeland Security has been busy swatting down Trumpworld's viral conspiracies on the agencies "Rumor Control" website.

--Kayleigh McEnany was lying her ass off on FOX News and the Host Neil Cavuto had to cut her off (!) while explaining to viewers she has no evidence and is spreading falsehoods.

I could go on, but why bother? The lies are going to continue long after Biden is sworn in because Trumpies live in an alternate universe.

Quote for the Day; "Winners have no interest or association in the opinions, actions or affairs of losers." -Jeffrey Fry

Posted by ImBlogCrazy at 8:15 AM