Trump Is Busy Misleading His Own Supporters For His Personal Benefit 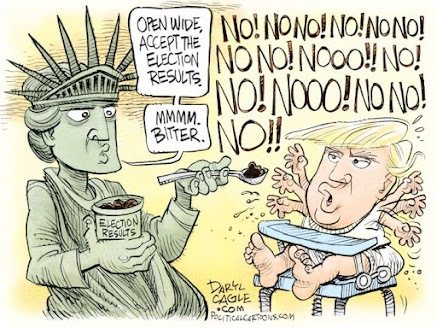 I almost feel sorry for the fools giving Trump money to fight the election results. Almost...

When Trump's campaign figured out he was losing the election last week, they began blasting out a nonstop stream of emails and text messages that led to a website raising money for an "election defense fund" to contest the outcome.

But, if Trumpies were able read the fine print they'd realize most of the money collected is going towards paying down his campaign debt and going to the RNC; and a political action PAC Trump founded, off the ground.

In other words, he's ripping off his own supporters who think all of the money is going toward "the good fight" to retain his presidency.

Election watchdogs have been scrutinizing the way the Trump campaign is divvying up the contributions. In particular it looks like Trump and his family are poised to financially benefit from the arrangement for years to come.

Paul S. Ryan, a longtime campaign finance attorney with the good government group Common Cause told AP, "This is a slush fund for Trump."

Ryan suspects that Trump will try to string out the meritless litigation in order "to fleece his own supporters of their money and use it in the coming years to pad his lifestyle while teasing a 2024 candidacy."

A portion of the money collected will go to the RNC, and the rest into Trump's PAC, according to campaign finance attorneys who have reviewed the details of the arrangement.

Like I initially said, I almost feel sorry for the fools, but they should have known better than to trust or believe Trump's words.

It's just another example of how Trump uses and abuses people. He wouldn't hesitate to throw his best friend under the bus if he thought it would benefit him.