Trump is Someone's Crazy Uncle and She Hates Him! 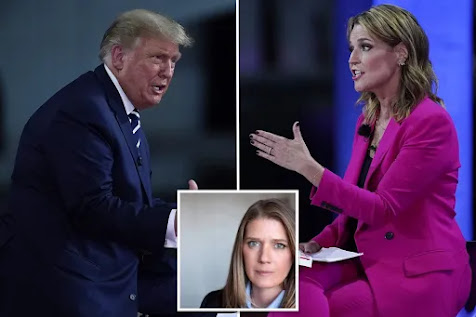 Kudos to Savannah Guthrie who skillfully exposed the essential Trump to viewers in his recent town hall debate.

When she told him that his words matter and he was not someone's crazy uncle who can just retweet whatever, I realized Guthrie was a real journalist and not all fluff. I owe her an apology.

I would like to add however, Trump is someone's crazy uncle; Mary Trump, who wrote a book about why he's so crazy comes to mind.

It get's more pathetic each day as Trump's bronzing makeup drips down his sweaty jowls as he's ranting in front of super spreader rallies.

Mary Trump's crazy uncle was bitch-slapped by reality recently when both of his October Surprises came off like lead balloons.

The first one, led by Rudy Giuliani, who was getting his dirt from Russian agent, claimed that a so-called hidden incriminating email was exposed.

The day that lie ran in The National Enquirers poor cousin The New York Post, social media shut it down and the mainstream press fact-checked it into a corner.

Now there's an investigation into this bogus email release that shows it's part of an ongoing Russian disinformation program to hurt Biden.

The second lead balloon came when AG Bill Barr had to admit that both of his year's long investigations (witch hunts) to discredit the Obama administration and Biden, didn't uncover any illegal activities.

As one might case that information infuriated Trump who believes in "bringing home the bacon."

Both failures have left Trump more desperate than ever before. His frustrated tweets come across as shrieks of rage from a man who knows he's losing his grip on power on Nov. 3rd.

Those tweets from Mary Trump's crazy uncle will continue to foul the twitterverse with regularity - even after he loses the election.

Quote for the Day: "That's why crazy people are so dangerous. You think they're nice until they chaining you up in the garage." -Michael Buckley