Hunter S. Thompson's Take on the 2020 Presidential Election Would Have Been Another Classic 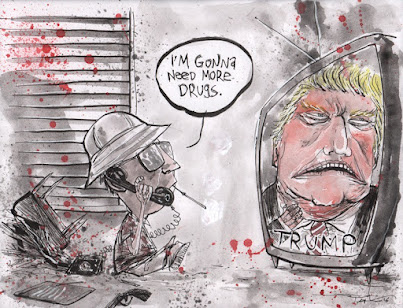 As a journalist, I've always admired and been envious of the creator of gonzo journalism; Hunter S. Thompson.

Everyone whose ever read FEAR AND LOATHING ON THE CAMPAIGN TRAIL, comes away stunned, shocked, and highly entertained.

His anarchistic tendencies, excessive use of alcohol and drugs, and constant war with conspiracies' would have made his coverage of this presidential election strand out among his peers.

I suspect Thompson would have admired the chaos Trump has caused in four years. I'm reasonably sure his descriptions of Trump and and his enablers would have left a nation aghast and laughing despite these terrible times. 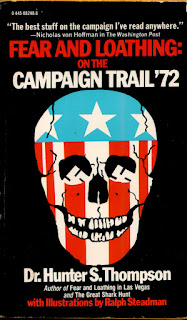 Here's an example of Thompson's work:

"The sporting editors had given me $300 in cash, most of which was already spent on extremely dangerous drugs. The trunk of the car looked like a mobile police narcotics lab.

We had two bags of grass, 75 pellets of mescaline, five sheets of high-powered blotter acid, a salt shaker full of cocaine, and a whole galaxy of multi-colored uppers, downers, screamers, laughers...and a quart of tequila, a quart of rum, a case of Budweiser, a pint of raw ether and two dozen amyls.

Man this is the way to travel, said my attorney."

Can you imagine Thompson covering this nasty 2020 race? He'd love it! His descriptions of debates and rallies would capture the truly chaotic times we're living in.

I've considered what other famous American writers might have to say about this election.

Ernest Hemingway's short crisp style would be powerful, and would pack a punch during these tough times.

John Steinbeck's stark style would be very effective in documenting the plight of the poor and minorities in the time of COVID.

Kurt Vonnegut, with his darkly satirical novel SLAUGHTER HOUSE-FIVE, would be describing the corruption and authoritarian rule coming out of the White House under the Trump regime.

But, in the end, Thompson would be my choice to cover this election because he'd fit so perfectly in this chaotic country today.

Quote for the Day: "Elections belong to the people. Its their decision. If they decide to turn their back on the fire and burn their behinds, then they will just have to sit on their blisters." -Abraham Lincoln