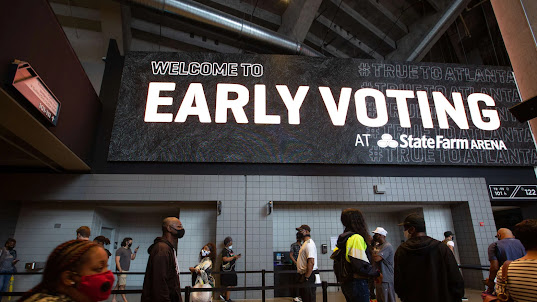 You can feel the fear in the air. It clings to the coronavirus that's spreading across the states unchecked.

Americans are afraid of dying during this deadly pandemic because there doesn't seem to be an end in sight.

His campaign may be struggling for money, but his influence as the incumbent president can't be matched when it comes to using dirty tricks. His abuse of power is one of the hallmarks of his poisonous presidency.

The term "Bully pulpit" barely begins to describe Trump's efforts to destroy our democracy and become the nation's first dictator.

No sane person wants to see that happen.

Trump's voter suppression efforts are backfiring as record waves of democratic voters are getting in lines up to 11 hours long to cast their vote early.

The last time I saw Democrats this motivated to vote was in 2008 when Barrack Obama won the election with a message of hope.

Now the party is motivated by fear that Trump's Army will be lurking near the polling stations with weapons on Nov.3rd.

Fear has motivated a new generation of first-time voters who are politically active and will not only vote, but who will also help at the polling places.

Sometimes being afraid is a good thing. It can force us to defend ourselves instead of sitting in stunned silence as the world around us collapses.

Quote for the Day: "He who is not every day conquering some fear has not learned the secret of life." -Ralph Waldo Emerson