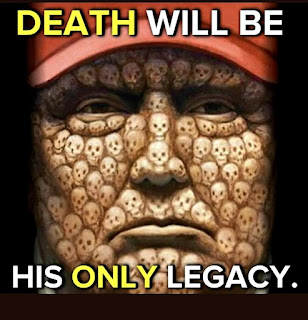 With 20 days left before election day, Team Trump is looking for an 11th hour reprieve to steal a victory from what looks like a sure Biden win.

Trump toadie, AG Bill Barr, has been dangling the possibility of a bombshell report with criminal charges against certain FBI members involved in the origins of the Trump-Russia probe in 2016.

Trump has been hoping the "John Durham report" instigated by Barr and based upon conspiracy theories, was going to be an October surprise in his favor.

To Trump's disgust Barr told top Republican officials the report won't be ready before election day resulting in a nightmare scenario for those Republicans who have been counting on the report to demonize the Obama administration.

Meanwhile, Trump is turning over every stone to get his much-needed boost in the waning days of the campaign.

Having a vaccine before Nov. 3rd is currently tops on his list of schemes to save the day. Frankly, I doubt it will make any difference with 50 percent of Americans skeptical about vaccines right now.

Next-in-line would be his push to get the experimental cocktail that he received at Walter Reed hospital approved, claiming it was a cure.

Medical experts have pointed out the treatment has not been approved for the general public, is still being tested, and it's a therapeutic... not a cure.

Despite being fact-checked by twitter for lying about the treatment being a cure, he plugs it at every rally now.

The treatment could actually be approved as a therapeutic in early November, according to some healthcare experts who are aware of the pressure the White House is exerting to get an early release of the product.

Time is running out for Trump's October surprise. Over 12 million Americans have already cast their votes and millions more are expected to vote prior to Nov. 3rd.

That doesn't mean, however, Trump won't come up with something in the following days. He's still commander-in-chief and could always try a "wag the dog" tactic in the trenches.