A Long Ten Days Until America's Destiny Is Revealed 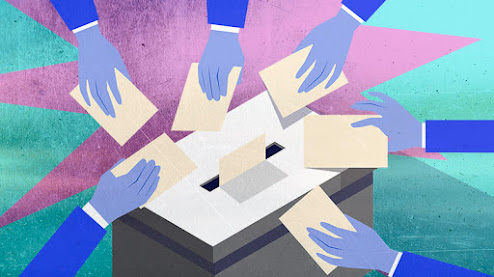 America's future will be decided on Nov. 3rd. when voters across the nation brave the pandemic to vote in-person.

Election gurus have been warning Americans that it's unlikely there will be final results in every state on that day. That it's more likely going to take several days before the record amount of mail-in ballots are counted.

In the span of two weeks we could be faced with a Constitutional crisis if Trump loses and refuses to leave The White House.

Instead of the traditional peaceful transfer of power this nation has enjoyed throughout its history, Trump is threatening everything our democracy stands for in a desperate attempt to stay in office.

Before we get to Nov. 3rd, each day will be 24 hours of open warfare between good and evil. Between fact and fiction. Between Trump's World versus Reality.

I expect to see Trump's abuse of government agencies to continue as he calls on lapdog AG Barr and other minions to arrest Biden and derail the election.

Trump's misuse of his office extends beyond American borders, as his love of dictators has shown us all in the last four years.

He's tried to get a foreign government - the Ukraine - to dig up dirt on Biden and was impeached for his efforts.

That didn't even slow him down, because he knew he had enough spineless senators to avoid getting his fat ass kicked out of office.

That bold and craven attempt was back in February. Try to imagine how deranged Trump is right now with less than two weeks to go and he's trailing in all of the polls.

It's not going to be pretty.

The fate of our republic is at stake. I'm hoping the United States survives this test and continues to fulfil the destiny our founders envisioned.

Quote for the Day: "Destiny is a name often given in retrospect to choices that had dramatic consequences." -J.K. Rowling