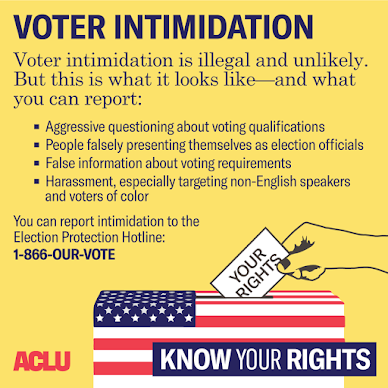 It appears that some Americans are going to get a taste of the old Jim Crow politics at the polls as "Trump's Army" prepares to intimidate voters in Michigan and Minnesota.

The call to arms is coming from Trump operatives who are encouraging armed militias to monitor polling places in the two swing  states on Nov. 3rd.

There's similar scary incidents in other states. In Florida Democratic voters are being targeted by the right-wing group Proud Boys via emails threatening harm if they don't vote for Trump.

Some officials are concerned that an attempt to block people from carrying guns to the polls will spur protests by gun rights activists outside of the voting centers.

But there's no choice. The right to vote without being intimidated is guaranteed in our government and backing down is not an option.

Violence on Election Day? Perhaps. No one really knows. Fear is driving people to vote early in every state as the data shows historic early voting nationwide.

More than 200 "Count Every Vote" demonstrations - and counting - have already been planned across the country by "Protect the Results," an effort launched by "Stand Up America" and "Indivisible" amid Trump's ongoing attacks on mail-in voting and the electoral process.

In addition, FBI and local officials have been running through worse-case scenarios in response to high tensions among voters.

State governors are issuing public warnings that any crime that threatens the sanctity of a Nov. 3rd vote will not be tolerated.

In the end, the majority of Americans are standing up for democracy despite Trump's best efforts to denigrate it in the waning days of his regime.

Quote for the Day: "If you want to control someone, all you have to do is make them feel afraid." -Paulo Coelho