The 'Big Con' is Collapsing: Trump's Tactics Are Taking Him Down 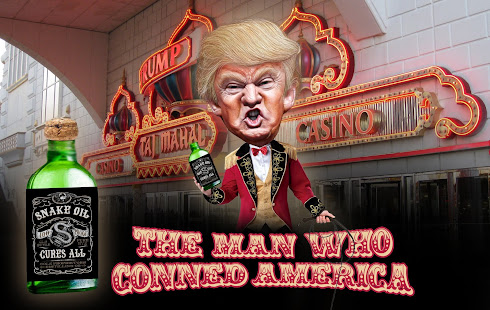 I've been thinking about the most infamous con men throughout history lately.

For example, Victor Lustig who became infamous as "the man who sold the Eiffel Tower twice" would be considered the most audacious in some circles.

But Trump has them all beat

He pulled off the longest con in history by getting elected the president of the United States by getting the backing of every angry conspiracist, and right wing wacko in America. (The Russians helped too, but I digress)

His regime has proven to be the most chaotic in presidential history. It's been dripping with corruption since the day Trump lied under oath during his inauguration about protecting all Americans and our democratic way of life.

2020 has not been a good year for our wannabe tyrant.

He was impeached; he failed to properly respond to a pandemic that's already killed 223,000 Americans in eight months; the economy is failing;  and he's losing his bid to remain in power.

The irony is Trump is taking himself down with a long list of childish grievances that most voters could care less about. His increasing open scorn for science and Dr. Fauci, and his inability to control his temper are losing the race for him.

He demonstrated that yesterday during the last presidential debate, and a few days ago when he was interviewed by Lesley Stahl for 60 Minutes. He lost his shit both times.

Historians say the only reason Victor Lustig didn't get away scot free with his monumental con in France was that he didn't know when to end the con.

Because Trump's long con worked in 2016, he refuses to change his tactics in 2020. It's that hubris that will finally take him down, much like his predecessor Victor Lustig.

Quote for the Day: "Hubris is one of the great renewable resources. -P.J. O'Rourke