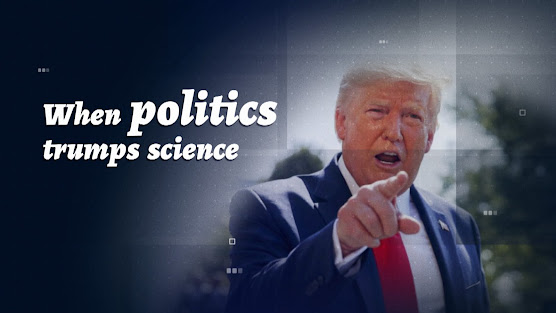 One of the hallmarks of great civilizations is the pursuit of science.

Called by many names throughout the centuries, science has always been about verifying facts in the physical world, nature, and the universe.

There were eras of such ignorance that scientists were called witches and agents of the devil, and were tortured and summarily executed.

Here we are in the 21st century and the president of the United States is calling scientists "idiots."

Any pretenses that Trump was listening to the scientists of the Coronavirus Task Farce have evaporated into thin air this week.

Trump has unapologetically turned on science like a mad dog with rabies.

He's holding daily super spreaders and talking about how stupid scientists are... and how the country is "turning the corner" against the coronavirus while cases spike in 47 states (latest update).

We always knew it would come to this. He's unable to operate in the real world any longer and has retreated into a bubble where adoring fans chant his name every day. And he's not losing the race.

Most Americans aren't stupid and recognize what's happening around them. Friends and family are dying in astronomical numbers

Hearing Trump trashing the foremost scientist in the country, Dr. Fauci, was a step too far for most Americans to ignore.

Dr. Fauci has been truthful about the dangers COVID-19 poses, in spite of the pressures Trump's regime has put on him, and continues to push for safety measures like wearing face masks.

The scientists are warning Americans that between the coronavirus and the flu, there's going to be darker days ahead this fall. More cases. More deaths.

When historians look back at this year, Trump will be credited with hundreds of thousands of deaths that should never have happened.

His mishandling of the pandemic, and the science to save us, was nothing less than a case of mass murder.

Quote for the Day: "History is the biography of murderers." -Khayri R.R. Woulfe