Pandemic Diary Day 155: Released Today: 'A Warning' We Should All Heed 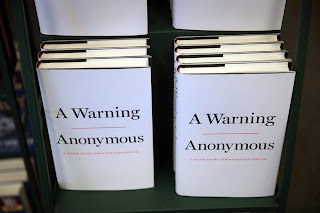 I'll take a moment here to explain who Anonymous is.

The story is there's an unknown Trump administration official whose been leaking out some really bad insider shit on Donny since he waddled into office.

As a matter of fact, this Anonymous insider has already written one book detailing Trump's depredations against democracy - A Warning by Anonymous - which was a 2019 best seller.

That book came on the heels of a bombshell op-ed published by the New York Times in September 2018 by Anonymous.

The author wrote in the preface of the new edition, "A second term for Trump unbound will mean a nation undone."

Pretty catchy, especially with 80 days to go before the election.

He continued, "Re-electing Trump will result in a continued downward slide into social acrimony, with the United States fading into the background of a world stager it once commanded, to say nothing of the damage done to our democratic institutions."

Back to the timing of the release of this book

Anonymous said last year that they would reveal their identity to Trump before the election, but the person stays nameless in the latest edition, only saying they plan to unveil themselves in "due course."

Interestingly, Trump told reporters in February that he knew the person's true identity but he couldn't say who it is. In response, Anonymous wrote in the preface, "Those eager for the knowledge should ask Trump why he has kept it to himself for so long."

Good question. I wonder when this Washington insider will suddenly step into the limelight? It sounds like it may be soon.

Here's a thought; what greater platform than during the Democratic National Convention this week as a special speaker?

Quote for the Day: "Sadly, how often did mankind heed a warning? Gadflies are often swatted unmercifully." -E.A. Bucchianeri
at August 18, 2020