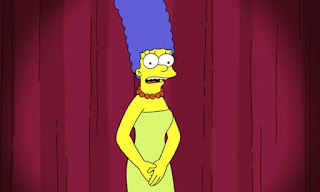 The Trump re-election team is bickering with a cartoon character - Marge Simpson.
The election is becoming more bizarre by the day.

However, I feel it's important for future generations to understand how crazy Trump and his minions were. In a nutshell:

The fight began when Trump advisor, Jenna Ellis, sought to mock California senator Kamala Harris after she was picked to become the Democratic party's vice-presidential nominee.

In response, the Simpsons official twitter account stated, "As an ordinary suburban housewife, I'm starting to feel a little disrespected. I teach my children not to name call, Jenna."

Look at who kept it going... Ellis twitted back, "Marge is probably going to vote democrat...by mail."

Here's the backdrop for the above insanity:
**We have a sociopathic president intent on getting re-elected by whatever means he can contrive.

**Life during the Trump regime has been an exercise in hanging on to reality and the truth - which have been under assault since Trump slithered into office.

**America is in the middle of a deadly pandemic with no leadership.

**The economy is shot. Millions of unemployed Americans are desperately trying to keep a roof over their head, and find money for food. Great Depression food lines are everywhere.

Congress has gone on vacation, instead of passing a stimulus relief bill for millions of Americans who are suffering right now.

**America's standing with other countries has been degraded to the point that they're laughing at us.

Quote for the Day: "Some are born mad, some achieve madness, and some have madness thrust upon 'em." -Emilie Autumn
at August 17, 2020