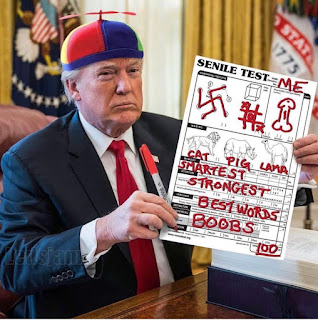 In 2016 white evangelicals set aside nearly all their beliefs to back their new savior...Trump.

They talked about how he would make America great again by fulfilling their main agenda; electing Republican judges to the Supreme Court.

The plan was to stack the Supreme Court, and federal judge positions with partisans favorable to the white evangelicals and he'd get their vote.

In 2016 Trump was portrayed as the second coming of Jesus Christ, or some ancient king who was a real shit but still helped out Christianity.

When Trump declared himself a "stable genius" the world laughed. But not the evangelicals. They became concerned. It was obvious Trump was publicly losing his credibility and people were talking about his reduced mental capacity.

Three and a half years later it's dawning on them that Trump is not Jesus Christ, or some biblical king come to save them from the evil liberals in the country. Trump is one stupid son of a bitch that only cares about himself. It must have been a tough revelation.

I suspect some of them will try to get right with God after the blasphemy of backing the most corrupt president in American history, and vote for Joe Biden.

They, along with an increasing conservative revolt in the ranks and files of the GOP, will combine to help bring the idiot down in November.

Republicans are rightly worried about their leader who keeps bragging about acing a standard cognitive test. 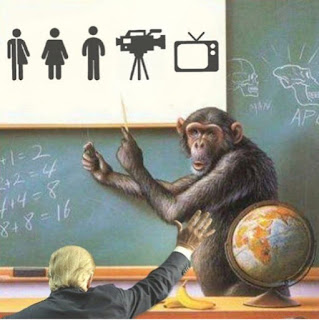 I think someone in the White House needs to get a spine and tell him the only people who get this kind of test are ones suspected of dementia.

It was pathetic listening to him in a recent interview as he proudly recited, "...person, woman, man, camera, and TV."

If anyone has ever seen chimps learning things by rote, they know Trump is in the same company as those primates. Just don't tell a chimp that. They'd be highly insulted.

People voted for Trump in 2016 for several reasons. But the core message Trump and his minions touted was to MAKE AMERICA GREAT AGAIN. People wearing MAGA hats are now rightly looked upon as racist assholes. No sign of greatness there.

That Trump was a great businessman (with four bankruptcies) was always a myth. Most Americans are realizing that as our national debt continues to bloom like deadly mushrooms in a dark room, the moron is a fraud. 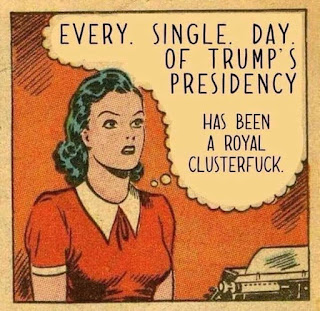 The same fraudulent maroon whose supporters overlooked the Trump University scandal is now squatting in the Oval Office.

The Trump Foundation was another good example of what a fraud Trump is.

It was shut down by the courts and he was forced to pay millions to veterans groups and other charities who never received any funds, despite the Trump Foundation's claims they did.

Still, in spite of his history, Trump was elected in 2016. This November, Americans will have a chance to save Democracy from a stable genius who didn't know that Kansas City isn't a state!
Quote for the Day:
"I'm a misunderstood genius."

Straight up. I have my doubts about t he House Select Committee on Jan. 6 holding anyone accountable for Trump's coup attempt. The chan...