Pandemic Diary Day 82: Trump Finally Gets His Wall... Around the White House 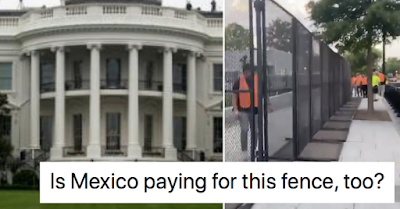 Take a good look around the White House today.

It resembles a heavily guarded palace, or government compound, in a third world country. Ten-foot tall black fences are stretched around the immediate perimeter, and more fencing surrounds an outer perimeter that covers nearby Lafayette Park.

Hungered down inside is an unhinged president sending out mass tweets to divide the country.

What we know. Trump didn't get his southern border wall completed, and Mexico didn't pay for it. The only wall the tangerine tyrant put up was around the people's house.

The idea of a wall has always appealed to the real estate/ reality star, who likes to build things. However, the desire to rebuild America's infrastructure has never been a priority for a punk like Trump.

A massive crowd of protestors have showed up outside of the White House today, ahead of George Floyd's funeral next week.

On Friday, D.C. police Chief Peter Newsham told reporters, "We have a lot of public, open-source information to suggest that the event on this upcoming Saturday may be one of the largest that we've had in this city."

I think it bears repeating, "...the LARGEST that we've had in this city." Without official numbers, it's hard to tell just how huge the protest is. There'll be plenty of statistics to look at later tonight, and tomorrow.

The police chief also said he expected it to be a peaceful protest. It looks like he was right.

What a contrast. There's 4,500 police, national guard, and active duty Army units, surrounding the nation's capitol as Americans call out for an end to police brutality against unarmed African-Americans.

It's a signature moment.

Trump trembling in the Oval Office while America voices it's displeasure over his ruinous reign. The protestors today want justice for George Floyd. They're also fed up with Trump's lack of leadership during a pandemic, and throughout his chaotic time in office.

The symbolism of a wall in Trump's rhetoric, and his reality, is appropriate today. 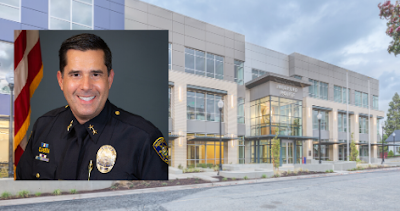 Medford Police Department - Chief Scott Clauson
Local Law Enforcement  Rogue Valley (includes Medford) cops have presented a united front against the actions of the police officers charged with murder after suffocating George Floyd.
What impresses me is that our cops get a lot of training when it comes to dealing with restraining suspects.

One of the things they're taught (both in the academy and local departments) is keeping a suspect stomach-down on the ground while handcuffed, or being physically held down, can cause death by positional asphyxia.

I don't think this kind of training is particularly new to police departments across the country. However, there's no national program guiding police departments in the use of safe take-down tactics. Some do. Others don't. That's one of the reasons why we're seeing protests in all of our major cities.

My wife and I have lived in Medford for nearly seven years, and have not seen cases of police brutality against people of color (admittedly there's a small black population here), or any particular race.

My contacts with the local cops have been positive ones. I see them out in community events all the time, mingling with the people they serve. It's sad that people in all cities can't count on their local police departments to treat them fairly.

Quote for the day; "Choose a leader who will invest in building bridges, not walls. Books, not weapons. Morality, not corruption. Intellectualism and wisdom, not ignorance." -Suzy Kassem
at June 06, 2020