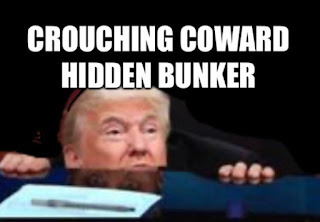 It was two days of infamy for Cadet Bonespurs.

Here's exclusive after-action reports by the Secret Service after protestors showed up outside The White House.

"We knew something was wrong when Trump shit his diaper hours ahead of his scheduled potty time. Looking out the window, the Commander-in-Chief was babbling at a gathering crowd of protestors outside on Pennsylvania avenue.

Agent Orville reported the president's eyes looked like two fried eggs and his tiny mouth was gaping open in primordial fear. I signaled Agent Lonny that it was time to take Trump down to the hidden bunker below the Oval office.

Agent Lonny and Orville escorted him to the presidential bunker - which had been recently remodeled with gold trimmings and a wall full of TV screens.

I witnessed the leader of the free world slowly regain his swag until he was walking around the plush bunker like the cock of the walk.

Then he got on Twitter and the threats started. From there, Trump called the nation's governors and called them a bunch of pussies for not using the National Guard to slaughter protestors.

An hour later, the president left the bunker on a carriage pulled by two Republican senators, Mitch McConnell and Mike Pence."

Top Secret Report by Bob The Next Day
"I watched as thousands of protestors gathered outside the White House as POTUS was foaming at the mouth and tweeting Fox News hosts for advise on how to handle the tense situation.

Making a command decision, Trump ordered 250 active military personnel from a military police battalion to squat outside the White House between him and the angry protestors.

I tried not to pay too much attention to his hard-working minions Matt Gaetz and Lindsey Graham, who were having to change his diapers every half hour. The two-man chore wasn't pretty to watch. I had to skip lunch. That usually only happens when I have to watch him eat lunch.

The job got a little harder after Trump decided he wanted to go for a short walk to get a photo op at an old church near the White House. I stayed in contact with other teams as Trump turned the military against peaceful protestors in a show of power that was more like a presidential pout.

At last. It was night night time for Trump, and with the help of Lonny and Orville, we three carried his sleeping fat ass to his room. I couldn't help noticing he was still clutching his cell phone in one tiny hand. It was almost enduring. Almost.

End of shift.- Bob
On the Homefront - Medford, Oregon 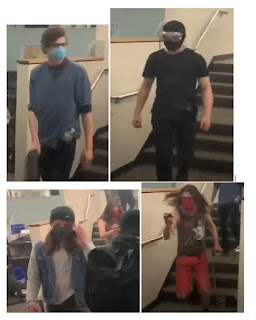 Name the rioters -
Authorities are asking for help identifying people who broke into the Multnomah Country Justice System and rioters from Portland.

If you recognize one of these clowns on the right, call 503-823-INFO
**An accounting - Gov. Kate Brown fired the director of the Oregon Employment Department over delays in delivering jobless benefits. Good to see someone shake the ancient system up.

**COVID stats - No new deaths reported. There's been 4,243 confirmed cases of the novel coronavirus in the state thus far.

**Here in Medford we had a few dozen morons trying to block cars downtown for no good reason. It was obvious they were bored students because most have never seen a black person in southern Oregon.

Quote for the Day; "The simplest way to make a coward courageous is to convince them that you admire their courage." -Mokokoma Mokhonoana
at June 02, 2020