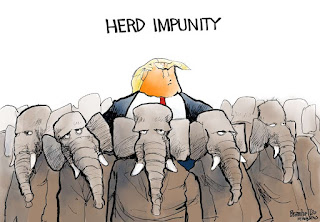 there's 156 days before the general election.

Based upon the last three-and-a-half years, these remaining days are going to be excruciating long.

After being impeached in February, Trump has been on a rampage and his rage has crippled nearly every scientific response to the pandemic, and now his militant rhetoric is stoking riots.

Being a seriously flawed individual, Trump has no empathy, sensitivity, civility, morality, honesty, or shame.

His ego needs daily strokes. His now infamous photo op in front of St. John's Episcopal Church holding someone else's bible while tear gas cannisters burst in the background is a snapshot of a sociopath.

It's sickening watching Trump's minions stand up for him and disregard truth, dignity, and reality.

Loyal lap dog and former Wisconsin governor, Scott Walker, praised Trump's waddle over to the church as something Rambo-like, "Hard to imagine any other POTUS having the guts to walk out of the White House like this," he cooed with slavish adoration on Twitter.

Try as I might, I can't recall any other American president who hid in the White House bunker from his own people. Historians may correct me here, but I doubt it.

What's horrifying is that Trump is fueling the fires of unrest in this country during a pandemic. People are afraid of an invisible killer, and the police after watching officers murder a helpless man on live TV.

Trump's tweets are not "fireside chats" comforting a worried nation. They're more like Molotov cocktails tossed from the Rose Garden or the Oval Office. They're expressions of hate and racism coming from a megalomaniac who only cares about being re-elected.

I hope to see Joe Biden use Trump's lack of leadership like a cudgel in the days and months ahead. The contrast couldn't be more complete. Biden has empathy. Trump doesn't even know what the word means.

On the Homefront- Medford, Oregon
**COVID Stats - The slow climb upward continues as three news deaths have been attributed to COVID-19 last night, bringing the total to 157 people who've died from the deadly virus. Latest count on confirmed coronavirus cases is 4,335.

For the record, Oregon is still nearly all white. The state's reputation for racism has been well earned, as a casual perusal of history shows.

Quote for the Day; "The minute you start compromising for the sake of massaging someone's ego, that's it, game over." -Gordon Ramsay
at June 03, 2020