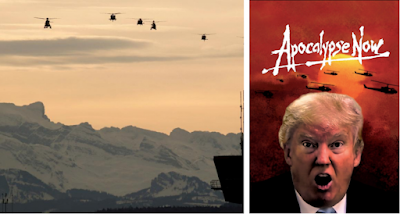 I've got the movie Apocalypse Now going through my head this morning.

Marlon Brando played Col. Kurtz, a renegade Army Special Forces officer during the Vietnam War, who had an outpost in Cambodia where he commanded American and Montagnard troops against the NVA. His followers believed he was a demigod.

Francis Ford Coppola produced and co-wrote the Academy Award winning movie that went on to be considered one of the greatest films ever made.

American Apocalypse
The chaos in America today seems surreal to me at times.

I feel like Cap. Willard wandering through bizarre landscapes of destruction and death. Trying to break through the reality of what's unfolding before me.

A pandemic. Over 100,000 Americans dead and counting. Political polarization. An economy struggling to stay afloat amid massive layoffs nationwide. Over 40 million unemployed. Desperate people unable to work, and standing in food lines reminiscent of the Great Depression.

Race riots in over 70 major American cities. Agitators from the Right and Left capitalizing on the chaos. Protestors inspired by Trump's followers defying state orders for safety and demanding all services, jobs, etc., open immediately.

Despite CDC and other healthcare experts warnings about another outbreak of COVID-19, right-wing groups continue to press the boundaries between science and politics.

An unhinged president who could start a race war, or conventional war if he thought it would help get him re-elected.

Unlike Cap. Willard, my mission isn't to kill someone.

My mission is to come out of this surreal stage in our history enlightened, and empowered enough to write about it for future readers seeking knowledge about what happened in 2020...
when America teetered on an apocalypse that threatened our republic. 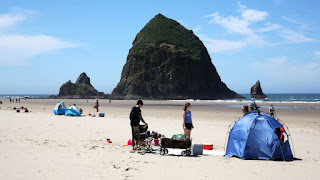 **Crowds return to Cannon Beach (not far from where we live) as the coast town begins to open.

**Authorities say the key to keeping Oregon open is going to be contact tracing. The question is, will enough people participate?

Quote for the Day; "Don't wake me for the end of the world unless it has very good special effects." -Roger Zelazny
at June 01, 2020