Pandemic Diary Day 80: Clinging To Democracy Amidst Race Riots and a Pandemic 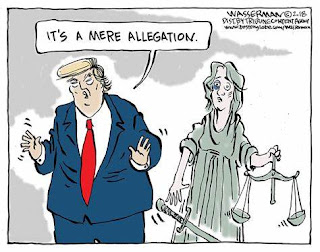 In my mind's eye, I see Lady Liberty and all she stands for clinging to the edge of a cliff as the nation tries to survive the worst president in American history.

Trump's ignorance and ego slowed down the response to the coronavirus, and his continuing assault against scientists and the healthcare experts will bear more grim results.

Because safety measures to mitigate the spread have been scorned by Trump who refuses to wear a mask in public and plays down social-distancing, I expect another wave of COVID-19... before the fall.

Coupled with Trump's despicable handling of the George Floyd protesters in DC and nationwide, Americans are going to have to navigate the biggest threat to our country in history... Donald Trump.

He's already used active duty combat Troops (82nd Airborne and the 101st Airborne) to threaten peaceful protestors in DC. The wannabe dictator also threatened state governors if they didn't follow his orders to call out the national guard in every state.

I haven't seen a time of unrest like this since I was an 17-year-old student in 1968, during the riots about the country's involvement in Vietnam and race discrimination.

We have a sociopath running the country now. Nixon was bad, but even he saw the writing on the wall and resigned when his party advised him to.

There's no way in hell this Republican Party will ever stand up to Trump. Most fear him so much they're prepared to go down with the ship in November.

Yesterday was the first time the Pentagon showed any sign of independence when Defense Secretary Mark Esper gave a short press conference. He said he wouldn't go along with Trump's threat to enact a seldom-used law to send out active military troops nationwide in a move to stop any more protests.

Trump, like a cornered rat, is scared. He sees his chances for being re-elected slipping away more every day. I expect he will continue to take a hard stand and to flout laws while doing it.

The question is, how far will Trump go in his maniac quest to rule for four more years? Will this world class con man, and wannabe dictator, be the death of democracy?

Only time will tell. 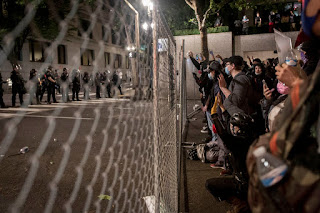 Portland protestors form a line at a fence in front of the police and raise their hands before the police use tear gas and stun grenades on them.
(Photo by Brooke Herbert/Oregonian)
Protests went on for a sixth night in a row.

**Even as cases of the coronavirus continue to show a slow upward trend, Gov. Kate Brown announced the framework for Phase 2 of Oregon's reopening.

I can't help being skeptical. It's getting harder every day to believe any politician. Are we putting the economy ahead of safety here? I guess the weeks ahead will tell that story.

Quote for the Day; "I am a firm believer in the people. If given the truth, they can be depended upon to meet any national crisis. The great point is to bring them real facts, and beer." -Abraham Lincoln
at June 04, 2020