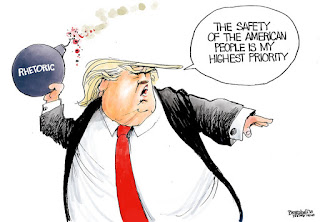 Looking forward to weekends was a pre-pandemic routine that celebrated the end of a work week.

Most working Americans use to look forward to a couple of days off spent with friends and family. Weekends were special for a whole host of reasons.

Weekends are wasted now during the coronavirus. For stay-at-home Americans they have blended into the week in one long nightmare where their health and finances are at risk daily.

Instead weekends are lost in these days of rage.

No one knows how many more people will die from COVID-19 in the coming months - or even years ahead. There's talk of having a vaccine by the end of the year, but if history is any guide I doubt it.

Black Americans are dying in disproportionate numbers from the deadly virus that's still spreading from coast-to-coast.

Forty million Americans are unemployed. Thousands of small businesses have been destroyed.

Riots have broken out in cities after a black man was murdered by a policeman. The crime was videotaped from all angles. When days passed without any action protestors burned down a police precinct, and the national guard was called out.

When authorities finally arrested the officer who killed George Floyd after the videos left no doubt about his guilt, he was charged with murder.

I look around and see a president so unhinged that I fear he may start a war any day, in a terrible "Wag the dog moment" to divert Americans from his ongoing corruption, and how he's mishandling the pandemic response.

Insert into this chaos that's choking our country, a presidential election where democracy, decency, and truth are at stake if Trump gets re-elected.

America is at a crossroad. I expect more days of rage as political battles become more intense leading up to election day.

I'm hoping that enough days of rage from those fed up with Trump and his minions will be reflected in the ballot box this November, when Joe Biden is elected. **Oregon state health officials haven't been disclosing all virus outbreak numbers. The scoundrels' admitted (after getting caught) large coronavirus outbreaks at workplaces were not being acknowledged.

They claim they're going to stop concealing outbreaks after the latest case - Townsend Farms - became public and 53 workers were infected.

Being somewhat dubious about local governments (actually any government) I suspect there's nasty little reasons for fudging the numbers.