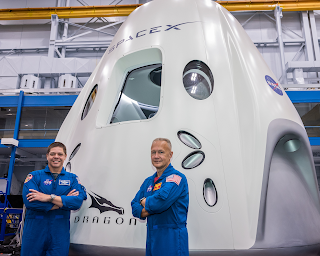 No more catching rides with the Russians if today's manned SpaceX launch works out.

There's no guarantee it will however. The launch has to be in a split-second window (4:33 EST), or it's going to be called off.

(Breaking news! The launch was called off due to the weather)

Instead of the usual cargo for SpaceX - a private company owned by Elon Musk who has been doing business with the US government/NASA since 2012 - today's payload is two astronauts!

Going from cargo capsules to astronauts marks the return of a space program that ended in 2011 with NASA's final space shuttle flight. It only seems fitting that the pilot of that mission is also going to be returning to space today.

Back in the saddle again. Veteran NASA astronaut Doug Hurley is set to make history again, this time with Bob Behnken. They'll be riding SpaceX's Falcon 9 rocket and Dragon capsule to the International Space Station on a test flight.

If things don't turn out today, the next try would be Saturday. Liftoff slated for 4:33 EDT. 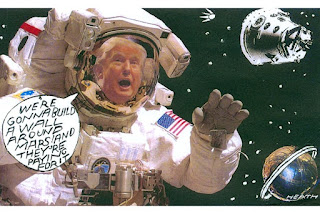 Trump/aka Cadet Bonespurs, and his puppet Pence will be at Kennedy Space Center with no face masks on to witness the historical moment.

I'm betting that Trump mentions his new Space Farce Force regardless of what happens today.

The flag that his minions came up with is classical Trumpian - meaning they ripped the triangle logo off from Star Trek and put it on a blue field. 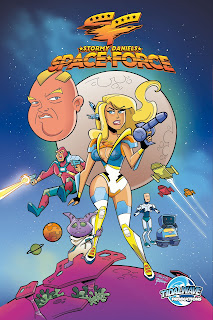 She had an affair with Trump while Melania was pregnant, and he paid her hush money. The cat got out of the bag however. The case is still waiting to resume after Trump gets his ass kicked out of office.

What's she got to do with Oregon?

"Female Force: Stormy Daniels" was created in conjunction with Daniels, who wrote the foreword to the book and edited the story herself. 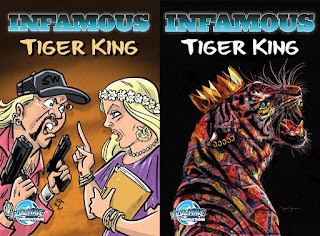 As an underground comic aficionado. I'm going to have to purchase these offerings. Maybe someday they'll be worth a lot of money. I've got Fabulous Furry Freak Brother comics from 1967, that start at $100 each.

Quote for the day; "Interstellar travel is like a flight to Australia on acid." -Stewart Stafford
at May 27, 2020