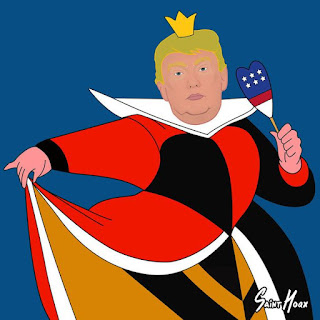 Since America has had to go down the rabbit hole with Trump, it's been anything but a wonderland.

His wanton destruction of norms, laws, ethics, and common civility, has demeaned the office of president.

Taking a look at Trump's latest assault against the First Amendment, we see another example of how far he'll go to suppress free speech he doesn't like.

Because Twitter finally ran a fact check below two of Trump's tweets, the tangerine tyrant lost it and screamed (in essence) "Off with their heads!"

In fact he threatened to "strongly regulate" or even "shut down social media platforms." They're both baseless threats that one would expect from a coward.

This form of bullying, which may have worked when he was a civilian, has met with stiff resistance from the courts who don't think he's above the law.

Nevertheless, Trump's attacks against the mainstream media have effectively inserted a "fake news" element that threatens truth-tellers who speak ill of him.

Trump is a prolific liar and is devoid of shame. He repeats falsehoods about mail-in voting fraud, and conspiracies' about ex-Republican senator, and now TV host, Joe Scarborough, for news cycles as a diversion to his lack of leadership during the pandemic.

I expect Trump's war on all media platforms will get more intense as the months pass by during what is shaping up to be the ugliest presidential campaign in American history.

All Americans Deserve the Truth

Trump's daily Twitter rants distort facts, and have to be fact-checked constantly.

The fact that Twitter even decided to take a stand (and fact- check him) surprised the hell out of me! It should be interesting to see how this battle between Trump and social media platforms escalates between now and November.

**Signs of summer - It was 91 degrees in Medford yesterday. Today is nearly as hot, and tomorrow looks to be the same. But... cool weather is on the way again as spring tries to cling on before fully surrendering to the heat of the summer. 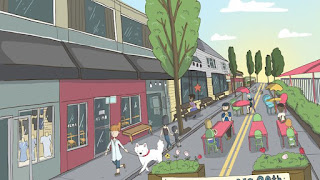 **By the end of spring Oregon cities are going to look a bit more like Paris, Athens and Barcelona's Euro-style street seating to help restaurants reopen during the coronavirus.

Business owners from Portland to Medford have teamed up to craft plans that will allow restaurants and bars to take their tables and chairs out to the sidewalk, into nearby parking lots or even place them directly in the street.

I can't wait to see how this all works out. There might even come a time when I feel safe enough to dine out - outside that is.

**COVID-19 stats: The good news is no new deaths were recorded. The number is still at 148. There are now 4,038 confirmed coronavirus cases in the state.

Quote for the Day; "Facts are stubborn things, but statistics are pliable." -Mark Twain
at May 28, 2020