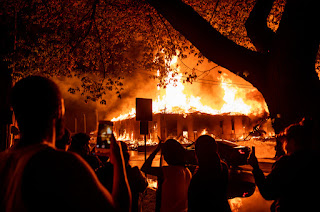 If I were a black man, especially a young one, I'd be more afraid of cops than COVID-19.

The coronavirus is a new challenge for minority communities who find it nearly impossible to social-distance because of poverty and tight living conditions.

But cops killing young black men goes back for decades. The killings have increased in the last five years where there's been over 1,000 cases (according to FBI records) of unarmed black men being killed while being taken into custody.

In a moment yesterday when Americans were reminded that 100,000 lives have been lost to the coronavirus, they were also confronted with watching a cop murder a non-violent black man on TV. It was an execution. 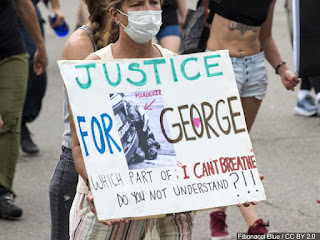 With onlookers begging the cop to take his knee off of George Floyd's neck - while he gasped for air and pleaded he couldn't breath - three other cops stood by and looked uninterested at what was unfolding before their eyes.

I felt a cold chill watching how indifferent the cops were as their partner crushed Floyd's neck while taunting him to "get up." Floyd later died from his injuries.

The outrage was immediate and culminated two days ago with riots in Minneapolis, Minnesota, where a Target store was burned down and looted. Tension in the city is still high today as officials promise investigations and justice.

The four officers were fired, and are facing an investigation into their actions that could lead to criminal sentences - and possibly death for the officer with his knee on Floyd's neck (although I don't think it would go that far).

What really horrifies me is seeing people murdered because of the color of their skin. There's no nice way of getting around the fact that racism in America is getting worse - not better.

I'm taking note of an insightful article from PBS called Racism in the Era of Trump: An Oral History, because it greatly expounds upon my observations. 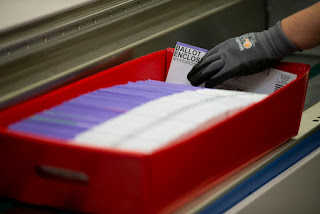 **Twitter talk
As Trump was busy attacking social media outlets because they put a disclaimer in a couple of his tweets, an Oregon group that claimed voters' party affiliations were being changed without consent had it's account suspended by Twitter.

My surprise was that Zuckerberg actually took some action. He totally punks out when it comes to fact-checking Trump.

The group - "My party was changed Oregon" - and the Oregon Republican Party launched an effort to gather first-hand accounts from voters who say their party affiliation was changed without their consent.

I wasn't surprised to see that the information they were gathering went straight to Trump's re-election campaign. It was obviously designed to help promote Trump's attacks against voting by mail.

The website Gateway Pundit which Facebook says, "is known for publishing falsehoods and spreading hoaxes" was the original source of the false claim and was picked up by the group.

Quote for the Day; "Racism is a grown-ups disease, and we should stop using our kids to spread it." -Ruby Bridges
at May 29, 2020