Pandemic Diary Day 43: The Check and Propaganda Are in the Mail 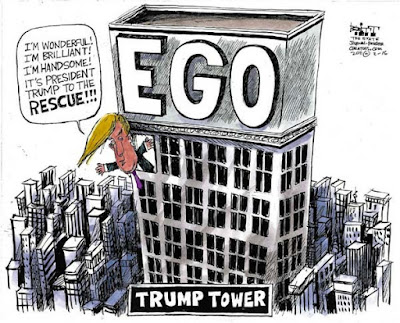 In retrospect, historians will marvel at the size of Trump's ego.

His world class narcissism will be studiously charted by researchers as they document his rise to power.

His id, an enormous Mt. Everest of self-love that future psychologists will ponder in medical journals.

Trump's legacy is one of a con man who hit the jackpot at just the wrong moment in American political history. He's done, and is doing, whatever it takes to massage that lumbering ego using government resources and his bully pulpit.

The latest example comes alongside stimulus checks with Trump's name on them (something no president has ever done to promote himself) to struggling Americans.

In a separate mailing (at taxpayer expense) the check recipients got a propaganda letter praising Trump with a replica of his two-and-a-half inch high letters (a generous interuptation of what looks more like a graph on a heart monitor).

I'm not sure how people felt when they received that letter. My guess is most threw it away when they saw Trump's name on it. Or burned it, after soaking it in Lysol.

But, I'm sure there's some morons who framed the letter and went around telling their mentally deficient buddies it was personaly signed by Stump himself! Our world is that polarized.


On the Homefront - Medford, Oregon
**Daily test results reached a state record high as confirmed virus cases climbed to 2,354. The death toll is now 92. Thus far, more than 51,000 Oregonians have been tested for COVID-19 since the state confirmed it's first case on Feb.28.

**Ahhhh choo! Allergy season has come early this year. Very few April showers. I do like the current cool weather we're enjoying however.

**A note of hope - When I awoke yesterday morning I felt great. As I've documented in earlier entries, I was fighting a vertigo-like thing. In other words, I was dizzier than usual! All kidding aside, I've been weak as a kitten for 15 days and suddenly... it goes away overnight.

When the still-unknown malady first hit me it was like a thief in the night. I woke up feeling like hell! To have it exit in the night is alright. I'm not complaining.

But, I sure wonder just what I had... you know, for future reference.

Quote for the day; "Life is like riding a bicycle. To keep your balance, you must keep moving." -Albert Einstein
at April 28, 2020