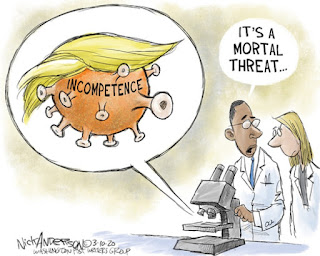 Trump has never taken responsibility for anything in his life.

He's been pampered since he began toddling about in his parent's mansion.

That explains why Trump thinks it's a fair tactic to blame everyone else for his stupidity. He's convinced he's a stable genius. And the Chosen One.

At least that's what he wants us all to believe. His actions over the past three years and four months, have convinced a majority of Americans of one thing, he's an imbecile.

After suggesting Lysol injections could cure COVID-19, CDC phone lines across the nation were ringing with callers who wanted to know if they should follow Trump's advise? There was at least one report of a man who ingested Lysol and was in critical condition.

When a reporter asked Trump if he took responsibility for the chaos his advise had caused, he fired back "NO I DON'T!" When pressed about people taking his advise his reply was... HE WAS NOT TO BLAME.

Since the day Trump slithered into office with the help of the Russians (see latest Senate Intelligence report confirming that as a fact), he has not taken the blame for any of his presidential actions.

Instead, he counters everything with an alternative reality that gets exposed by fact checkers daily. How's that blame game working out for Trump lately?

Consider this: Like presidents in the past who have faced national emergencies, the country rallied around him and his approval numbers went up for the first time in his reign. Briefly.

The gain was short lived. As of this entry, he's not only lost that short burst of popularity, but his ratings have been plunging every week.

The blame game is running on empty.

Trump's going to have to come up with another approach, which I sincerely doubt he will do. He can't help himself. He's a coward. A bully. And a liar.


On the Homefront - Medford, Oregon
**The sun came out yesterday and it was 80 degrees! Today, however, the clouds are back and so are scattered showers. It's been an erratic spring in an erratic year.

**Some good news - The Oregon Humane Society is distributing 50,000 pounds of pet food statewide for those impacted by the coronavirus.

But Congress changed that with the passage of the CARES Act that broadened eligibility during the pandemic. Oregon has been struggling to adapt aging computer systems to accept the expanded benefits, but is online today.

Quote for the day: "Character-the willingness to accept responsibility for one's own life-is the source from which self-respect springs." -John Didion
at April 29, 2020