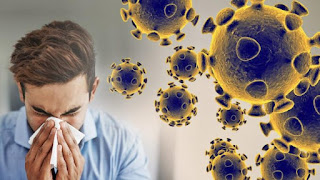 What started out as White House press briefings about the coronavirus has deteriorated into Trump loyalty rallies.

There's no other way to put it after yesterday's fight between our Liar in Charge and the press.

After listening to Trump's task force lackey's (with the exception of Dr. Fauci whose not a Trump minion) it was apparent... the task force is no longer about COVID 19,
it's there to defend Trump's alternate realities as he spins lies to make himself look good.

At one point, Dr. Fauci directly contradicted Trump's claim about a drug being a "game-changer." Unfazed, Trump went on to contradict Fauci. Like the majority of Americans at that moment watching the drama unfold, I believed Dr. Fauci... NOT TRUMP!

After that it was game on! Trump viciously attacked NBC news reporter Peter Alexander for asking whether he was giving Americans "false hope" by touting an unproven drug for COVID 19.

Here's what I know; all of the healthcare experts in the country are doing their best to fight the pandemic. I'm looking to "real" experts - not Trump cronies - for information.

Dr. Fauci predicted that Americans will have to stay at home for (at least) three weeks.

Startling statistic: Men are dying at twice the rate of women and no one knows why.

Observations around the country

**Under the category of corrupt politicians:
Four senators under fire for stock-selloffs amid the coronavirus outbreak. This story will have legs as investigators (there's already a call for more investigations) look into the Trump children and the Kushner family. I'll bet they used insider knowledge to cash in on the crisis.

**US Tax filing day extended to July 15th. This hasn't happened in my lifetime. Another first in the Age of Our Modern Pandemic.

Our northern and southern borders are officially closed to all but essential traffic to keep supply lines open. Still another first in a lifetime.

**Pet food stores are still open. As they should be. Just not allowing more than five customers in at a time. When Shirley and I went we were the only customers there. Washed up when we got home.

**I know there's other parts of the country that are having problems with young people still gathering in crowds despite all warnings. I'm happy to report that's not the case here.

**Just heard that state and local parks in Oregon are closed to visitors.

**The good news is that spring has sprung and it's time for gardening. Shirley and I will get our vitamin D, a bit of exercise, and the satisfaction from having plenty of projects to do both outside... and in.

**I'm hoping to see a rebirth of reading books among children and adults. Reading has always been one of my loves. There's nothing like getting lost in a good book.