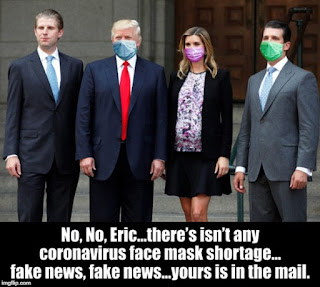 The one thing I was hoping for during these terrible times, was that Americans would all come together to fight a common foe.

Anger is replacing patience as needed supplies for the states aren't arriving and COVID 19 cases are increasing hourly.

Things are getting uglier at the White House as reports come out about how badly the Trump regime mishandled this pandemic from the start.

State governors are crying out for federal help right now as the coronavirus cases in their states skyrocket daily. They're feeling the pressure as their constituents panic at the lack of testing, and options.

Trump reverted back yesterday (there was a small hiatus) to attacking the press. If there's one thing he hates it's the truth, so he resorted to his fake news routine...

Which, of course, caused millions of viewers watching Trump to be confused. It seems like every time he holds a briefing the stock market sinks and his lies have consequences.

The big question yesterday was "Where is Dr. Fauci?"

The Trump Task force didn't have him in the lineup for two days and his absence was noted by all because he was the only member of the team that was consistently telling the truth - and even correcting Trump on live TV when necessary. Update: We should hear from Dr. Fauci today.


On the home front - Medford, Oregon

**Thus far there's no shortages of alcohol. I went into a nearly empty state liquor store yesterday, and bought a couple of bottles of good booze. They were still well-stocked. Yes, I washed my hands with soap as soon as I got home!

**Pharmacies are still open. My wife was able to pick up her prescription with no problem. Again, there was hardly anyone there. More handwashing.

**Had a scare when our eldest son Richard called and said his 18-year old son, Roanin, woke up sick this morning. He called the ER and they instructed him to go to a triage set up outside the hospital ER where they checked his temperature - which thank goodness wasn't high - and sent them home with instructions on what to watch for.

**It's weird. We've known our neighbors for seven years and party with them, but had to stop because of our new reality. Texts just aren't the same, and forget phone calls... they're for emergencies!

… important events are happening so fast, both near and far, that's it's impossible for me to report on them all daily. This diary is more of my way of coping with this brave new world than anything else.

These entries reflect my journalistic, personal, and emotional responses to the coronavirus, and how it's affecting us all.
at March 20, 2020