Cruising On Sunday: Take a Read 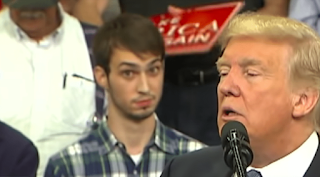 We're going to keep it chilly this Sunday with some light stories and comments from the far side.

Rally Around the Meme!

A young man with a very expressive face stood behind Trump during a recent rally in Montana and became a viral sensation.

How? Here's the video.

The young man, a senior in high school, said he was just reacting to some of Trump's comments. He, and his two friends, got kicked out for not clapping and not being enthusiastic enough.

You know how game shows prep the audience before the cameras come on? There's signs that tell the audience when to applaud and when to laugh.

At Trump rallies the signs say "Go Ape Shit..." and "Laugh hysterically." Sometimes it's hard holding the vomit in, and people have to be escorted outside for fresh air.


One of the more unusual stories I ran across was the one about the 72-year old busboy at a pancake house. It's the story of a man content to bus tables for 54 years. He owns a house, is married, and intends to keep working as long as he can.


The takeaway: the man is happy with his job. That may be hard for some of us to understand. I know it took me a while to really wrap my mind around it, but I get it now.

Guess what? NASA is studying an underwater volcano in Hawaii to learn more about alien life. Scientists think conditions are similar to what might exist on Saturn's moon, Enceladus.

I think that's really a far out concept. My question is, when do we start planning trips to Enceladus? And, what about Mars?

No One Else Thought Of This...

We're all familiar with the famous painting the, "Mona Lisa." One time, or another, we've all seen images of the iconic oil painting.

Now, according to a doctor in Boston, the person in the painting was suffering from an illness, possibly a serious thyroid condition. I'm not sure why no one else in the last few hundred years noticed the woman's condition.

Either this doctor is blowing smoke out of his ass, or this claim made from looking at an oil painting, is a new way to diagnosis patients in the 21st century.