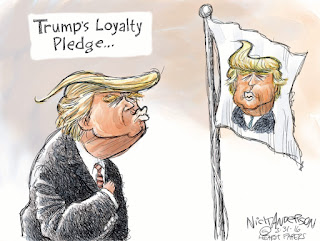 Just for shit and giggles, let's take a look at the world according to Trump.

Don't expect any insights. He's really just your run-of-the-mill egomaniac and sociopath that somehow got elected to lead the greatest nation on earth.

Let's hop into a boat and go out into The Swamp, formerly known as the White House, to look at some of Trump's cadre of societal castoffs and family during the last 19 months.

A Guide to Trump's Favorite Dictators

If anyone was left in the world wondering if Trump was Putin's puppet, the answer became clear after the Surrender Summit in Helsinki this year.Putin and Trump's bromance is the worst kept secret in the world.

How about that earth-shattering Summit in Singapore where Trump got worked over like a bitch by North Korea's dictator Kim? For a moment there, Trump's cult-followers were chanting about a Nobel Peace Prize because the world was now safe from any nuke threats from Rocket Man.

If you've been following that charade you know the US is back to square one with North Korea. Donny's take on the breakup is he still insists their warm friends.

A Guide To Trump Associates and Friends

David Pecker: Trump cohort for over 20 years, and kingpin behind the National Enquirer and AMI, has been granted immunity in same felony case as Weisselberg, and turned over a vault of incriminating shit about Trump's past.

George Papadopoulos: a one-time foreign policy adviser to the Trump campaign has admitted to lying to the FBI and is awaiting his sentencing. One more thing, he just happens to be the real reason why the Trump/Russia investigation was launched.

A Guide To Family

Ivanka Trump: the daughter Trump would have liked to date if she wasn't his daughter. Recently closed her businesses down because of continued investigations into forced labor products she was selling.

Don Trump Jr.: a loudmouth just like his dad, he may find his cocky ass in jail alongside the old man. Think Trump Tower meeting and Bob Mueller.

Time for me to walk on down the road...
Posted by ImBlogCrazy at 7:54 AM