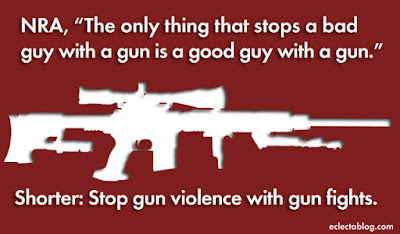 One of the NRA's favorite claims is "a good guy with a gun will stop bad guys with a gun."

That fable is part of the foundation of lies and half-truths that the political wing of the NRA has been spreading like cow manure in the fertile fields of fear that their supporters live in for decades.

Every year the NRA holds an annual meeting where members bring guns and praise for concealed weapons.

This year Vice President Pence is the scheduled speaker, although there's rumors Trump may also show up and lavish praise on AR-15s.

Here's the kicker; no guns (or any other weapons) will be allowed in the forum because the secret service doesn't trust hundreds of crazed attendees toting assault rifles.

The may call themselves "good guys," but the secret service isn't going to take a chance one of the "good guys" shooting someone they think is a "bad guy" on stage.

There's going to be an estimated 80,000 people gathering Friday in Dallas, Texas. The testosterone levels will be through the roof. Throw in some alcohol and guns, and by golly you have a party!

The organizers are bragging about 20-acres of firearm exhibits that will be one of the featured attractions.

Panels of so-called experts will discuss how it's a person's right to carry a gun anywhere in public. Anywhere that is, but the main venue of the NRA gun-love fest.

The NRA thinks it's okay to carry guns in schools. Left to their own devices, the NRA would have allowed it's members to tote firearms to the venue.

However, the gun-worshipping organization wouldn't have been able to feature Pence, and possibly Trump, if the secret service didn't get it's way on disarming the attendees.

Apparently, all the so-called "good guys" can't be trusted with weapons in public. Now imagine that...