It's Finally Come To This: Trump Openly Threatens DOJ 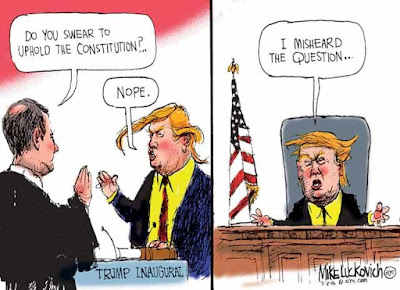 The pretense of acting like Trump's cooperating with the Russia investigation has been dropped like a hot potato.

Another Trump lawyer, Ty Cobb, has been sent packing. His crime? Apparently He's been advocating for letting Mueller complete his investigation without any interference from the Oval Office.

Trump's latest barrage of bilge involves threatening to "get involved" with the Department of Justice. As in, "I'm coming to take you down."

News flash for Trump...despite what your tortured brain tells you, it's not okay to attack government agencies with impunity.

That's the message Deputy Attorney General Rod Rosenstein gave a group of Republican lawmakers Tuesday when he signaled he would not back down from their impeachment threats.

Trump's rotating list of lawyers hasn't gone unnoticed. A lawyer only lasts as long as he stays in Trump's favor and agrees with him on everything.

Real lawyers are leaving him like fleas jumping off a dog because he won't take their advise. It's really that simple. The word has gotten around in lawyer-land that Trump is using and abusing his legal team.

It's also becoming clear that Trump is throwing off all the shackles of law and a civilized society. He infusing our legal system with puppets, and claims he's above the law - any law, because he's the president.

This growing confidence of his doesn't bode well for the safety of our Constitution.

A showdown is coming between our whole system of law and order and checks-and-balances, versus a demagogue who would be a dictator.