Trump Should Have a Better Vetting Process For His Own Lawyers 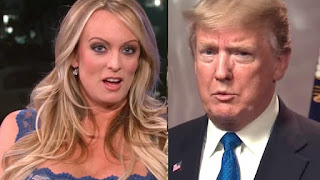 By now, everyone knows that Trump's vetting process for cabinet positions, and other government positions, is a joke.

How could it not be? Just look at the parade of losers who Trump nominated that are gone already.

But...when it comes to picking his own lawyers he better change his loyalty system and look for some real lawyers and not idiots like Rudy Giuliani.

Giuliani in a conversation, with Fox News, blew the lid off the Stormy Daniels case by admitting Trump was aware of everything.

Now you have Giuliani saying the story is real, but it was not an illegal deal.

Giuliani's insistence the money had nothing to do with the campaign is complicated by the fact that Daniels' silence was secured just days before the 2016 presidential election, and as Trump was dealing with the fallout from the "Access Hollywood" tape in which he bragged about sexually assaulting women.

Legal experts were surprised that Giuliani decided to let the cat out-of-the-bag (with a bogus cover-up story) on live TV. Some speculated it was a preemptive strike for what will be revealed in Michael Cohen's records.

By getting out front, and literally flipping the story around, Giuliani has further endangered Trump according to legal experts who questioned Giuliani's understanding of the law.

Trump, as he's done in the past with other individuals, picked Giuliani because he knew he would be loyal to him - to the point of breaking laws.

Ignoring the reality that his legal team is a bunch of B-list legal hacks will be Trump's eventual downfall.

It's no wonder that top-shelf lawyers are avoiding what once would have been a plum career choice. They know, based on history, Trump will never take their advise if it doesn't fit his reality.

That fact will be Trump's Waterloo.

Posted by ImBlogCrazy at 6:58 AM