What Does Trump's 2016 Campaign, Russia, and WikiLeaks Have In Common? Conspiracy! 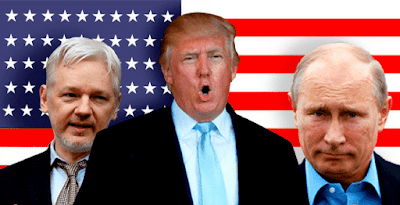 It's finally the right time to use the "C" word - Conspiracy when referring to what happened in the 2016 presidential campaign.


Reuters was the first to report this story...


"The Democratic party filed suit against Russia, President Donald Trump’s campaign and WikiLeaks on Friday, charging that they conspired to disrupt the 2016 US presidential election campaign, a court filing showed.The party alleges in the federal lawsuit in Manhattan that top Trump campaign officials conspired with the Russian government and its military spy agency to hurt Democratic presidential nominee Hillary Clinton and tilt the election to Trump by hacking Democratic Party computers, the filing showed."
In normal times this would be a nuclear bomb and the fallout would have the whole country talking.
But, as we know, these are not normal times (anything before Trump) and the bombshell story is busy competing with stories about students marching for gun control, and 420 party's - in particular an epic one in California which legalized recreational pot this year.
Business Insider reported...
"The suit was filed in federal court in Manhattan and alleges the Trump campaign worked with WikiLeaks, the Russian government, and the GRU, Russia's military intelligence unit, to hack into the Democratic National Committee in the summer of 2016 and disseminate stolen materials to the public.


The Democratic Party claimed the actions were taken specifically to hurt former Democratic presidential nominee Hillary Clinton's campaign, and that they amounted to an illegal conspiracy to maim the party and sway the election against the democrats."


Meanwhile, The Washington Post and the rest of the mainstream media have followed up with reports of their own.


Also competing with this story of conspiracy, is Republican efforts to stop the Mueller investigation, Ex-FBI head James Comey's new book about Trump, and the Stormy Daniels saga.
Now toss in Trump's personal lawyer being busted by the FBI and the rumors he'll flip like a fish out-of-water when lawmakers put pressure on him, and you can see why the general public is shell-shocked with daily revelations.
They all tend to become a blur after awhile. Nothing short of nuclear war can hold a headline throughout a 24-hour news cycle.

I fully expect this latest development - the civil lawsuit against Trump's campaign, Russia, and WikiLeaks - to be thrashed around in the courts for months, if not years.