Is This Lying Alex Jones Waterloo? 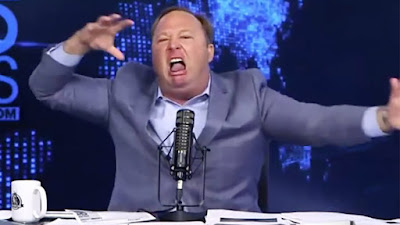 The scum who calls himself Alex Jones is in a lot of trouble. It's about time!

How many years have to go by with constant harassment from Jones and his hate site Infowars, before enough is enough?

A pair of lawsuits were filed late Monday.

The parents of two children who died in the December 2012 shooting in Newtown, Connecticut, say Jones’ repeated lies and conspiratorial ravings have led to death threats.

The suits join at least two other recent cases accusing the Infowars host of defamation.

For years lying Alex pushed a story claiming the whole Sandy Hook thing was fake. He even claimed the parents of the dead children were crisis actors.

If the term crisis actors sounds familiar it should. In the recent Florida high school massacre, students were criticized as crisis actors during and after the terrible incident by extreme right-wing loons like Jones.

As of yesterday, Infowars still blatantly posted this headline:
FBI Says No One Killed At Sandy Hook.

These charges of defamation are going to be compounded by another lawsuit filed in March by a man who recorded the deadly car attack at last year's White Supremacy Rally in Charlottsville, Virginia.

Jones accused him of being a "deep state shill" and a "CIA asset" who helped organize the attack. Now Jones will get to see him in court.

But not before he goes to court for accusing a 24-year old man of being the real gunman who killed those 17 people at Marjoria Stoneman Douglas High School in February.

Seems to me, that pig-bastard is going to have a lot of lawyer bills this year...and it's only April.

Could this be the end of Infowars, one of the most extreme right wing sounding booths on the internet?

Let's hope Jones is left penniless, and living in the streets by the end of this year.