Has Trump Set a Record For Employing Lawyers? 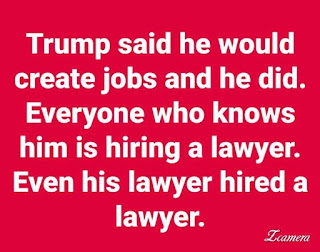 If all the lawyers in America were to erect a statue of Trump in some future museum of law, the plaque beneath it would have to mention how many lawyers he's employed since his daddy gave him a million dollars and turned him loose on the world.

Since the early 1980s, Donny has been hiring lawyers to clean up his messes for him. As the decades passed his use of lawyers increased until he had a virtual rat pack of litigators.

Trump's known for using lawyers up and spitting them out like pumpkin seeds. Witness his 15 months in office.

Can you name the lawyers he started off with in his administration, and which ones he's thrown under the bus?

Has there ever been a man in America that uses so many lawyers in such a relatively short time?

One of his best lawyer buddies, Michael Cohen, aka The Fixer, has been arrested and charged with numerous felonies.

I'm waiting to see how far Trump kicks his ass down the field when lawmakers go through his confiscated computer records and tape recordings.

The real chief-in-staff at the White House, Sean Hannity, just happens to be one of Cohen's three clients. Imagine that?

When the word got out, Hannity claimed he just talked to Cohen now and then about real estate deals. Other than that they were just buddies.

No problem that Cohen doesn't know the first thing about real estate, and Hannity isn't a developer.

Based upon Trump's history, despite being buddies, and Cohen's ability to pull Trump out of trouble over the years, Trump will drop him like a hot stone if it takes pressure off of him.

The rumor that it's getting harder to find White House lawyers has been circulating for months. At one time, such an appointment would have been eagerly seized upon by every lawyer in America.

Who can blame them?

No one appreciates being used and thrown away at the whim of a psychopath who won't even listen to their advise.