Today is a Day of Protest and Celebration Across America 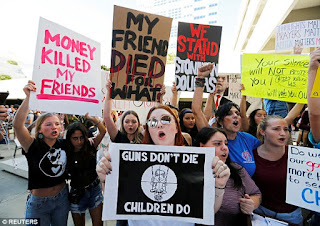 Today is my sister, Linda's birthday.

Of more interest to you perhaps, is it's the second nationwide student walkout this year.

Today is the 19th anniversary of the mass shootings at Columbine High School in Columbine, Colorado.

Once again students will take to the streets of our nation to demand gun control laws, because the adults don't seem to know what to do about mass murders in America.

They know that Congress and Trump are afraid of the NRA because of the hold it has on them. The NRA lobbyists award lawmakers for stifling any legislation that could make them uncomfortable.

I hope those cowardly lawmakers are taking notice. These protesting teenagers will soon become voters. As a matter of fact, they're using this protest to sign up new voters. 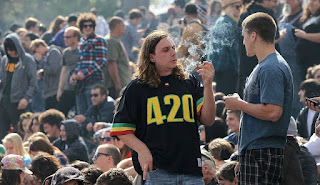 For years, states have had informal 420 parties on this day.

Well, today is going to be the Mother of All 420 parties in California!

Check it out dude!

The California State Bureau of Cannabis Control has issued 47 temporary event licenses to groups that are limited to holding the marijuana celebrations on county fairgrounds that have authorized such events with city approval.

Meanwhile, a survey of some 1,000 marijuana users that was released Tuesday by the firm LendEDU found that the average 4/20 participant plans to spend $71 on marijuana to celebrate the unofficial holiday, and about 35% of respondents are planning to take off work Friday.

No doubt about it, today is a day of action and empowerment.