Slimey Sessions Always Eager To Do His Master's Bidding 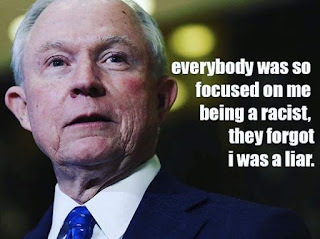 Even to a casual observer, AG Jeff Sessions is a mean little bastard.

He's shamelessly grovels at Trump's feet even when Trump is attacking his integrity.

But Sessions seems to think it's worth it, because he gets to pursue his racist agenda to new heights.

Just look at the timing of the firing of former FBI Director, Andrew McCabe. It was announced one day before his retirement (thus disqualifying him from full retirement).

I know that Trump didn't like McCabe, but he let Sessions be the bearer of bad tidings because the little weasel was so good at it.

Always ready to serve his master, Sessions added a little flair to the firing by doing it at the 11th hour.

That's just mean. It's a way of making a point and sending out a warning. Don't dare stand up to Trump. No matter who you are.

Sessions enjoys the disruption he's causing with his racist agenda. It's a dream of a lifetime for the diminutive elf look-alike.

As slippery and underhanded as he is, Sessions knows that he's treading rough water with Trump's impulsiveness and lack of loyalty.

It's Sessions eagerness to please Trump, who treats him like a junkyard dog, that's saved him thus far. There's no law he wouldn't break for Donny.

I'm surprised the man can stand without a backbone. It's a trait most Trump's supporters seem to possess.