Embracing Another Week of Chaos in the Trump Era 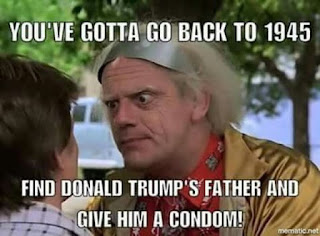 Ready or not, this is the start of a new week of chaos in the Trump era.

Rep. Mike Conaway (R-Texas) said Sunday (on Meet The Press) the House Intelligence Committee was not tasked with investigating collusion between Russia and the Trump campaign.

Really? Then what were they tasked with?

And, what about Conaway's committee report last week that said there was no evidence of collusion between the Russians and the Trump campaign?

You can't have it both ways.

On one hand, Conaway claimed the committee was only probing to see if Russia interfered with the 2016 election, not whether the Trump camp was cozy with Putin.

Conaway's report totally ignored the Democrats take on what the committee did, and did not do. Like interview key witnesses.

Another, complete report is due out this week, and we'll have a chance to see both sides of the story.

Don't be surprised if someone in the White House gets fired. Donny is in full Apprentice mode, and has been gathering steam since last week.

Gina Haspel, Trump's nominee to replace Mike Pompeo as head of the CIA, is already being challenged by some Republican senators like Rand Paul - who is dead set against her getting the job.

Expect more new stories about this issue, and the issue of getting Trump nominees through the vetting process.

Even though Jeff Sessions was a good puppet and fired Andrew McCabe for Trump, he's going to be back on the grill again.

With the recent news that Sessions didn't oppose (under oath he claimed he opposed it) an idea to approach the Russians during a highly publicized meeting with Trump and his staff during the election.

Expect to see increased stories about another round of tax cuts by Republicans. They're still trying to sell the idea the whole tax scam law will benefit America's middle class. It's been a tough sell thus far.

The investigation into Russian meddling in the 2016 election has expanded to include President Trump’s family business, with the special counsel, Robert S. Mueller III, subpoenaing the Trump Organization for documents related to Russia.

Expect to hear more about this story as the week goes on. Last year, Trump said that Mueller would be "crossing a red line" if he got into his family business during the investigation.