Armageddon Around the Corner? 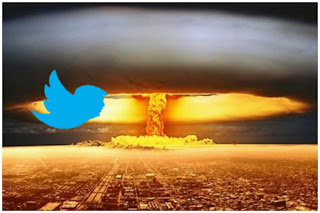 When it comes to nuclear weapons, I get nervous.

Probably because of my Cold War upbringing.

It's bad enough that countries like the US, Russia, North Korea, China, Pakistan, and India, all have the means of destroying the planet, but when other players come into the equation, it gets downright scary.

Turkish authorities captured four men, all gang members, who were trying to sell a radioactive nuclear element for $70 million on the black market.

They had three pounds of synthetic nuclear element, Californium, which is commonly used to set off nuclear reactors.

Just think what a group like ISIS could do with a package like that! What surprises me the most is so far no extremist group has gotten possession of some kind of nuclear weapon and caused chaos with it.

Moving on to Iran

Despite warnings from the US and allies, the Iranians are working on nuclear submarines. Rumors are flying around Washington that Trump is going to nullify the current nuclear agreement supported by most of the countries in NATO.

Moving on to North Korea

So far, the North Koreans have been silent about the upcoming meeting between their leader, Kim Jong Un, and Trump.

Odds makers have it 50-50 that the two leaders will actually meet somewhere. There's negotiations going on behind the scenes, according to the Trump administration.

Call me silly, but I don't believe one word coming from the White House.

This meeting may (tentatively scheduled for May), or may not happen, and even if it does, the chances of arriving at a mutual agreement between the two countries is slim and next to none.

Imagine for a moment, those two egotists in the same room trying to one-up each other in rhetorical lies. The only substance to that meeting would be the byproduct...the bullshit.

The chance of a Trump tweet tilting the precarious balance can't be dismissed.

One more thing; we know that they get hit the American mainland with nuclear missiles now.

Moving on to China

The recently anointed dictator for life Xi, is poised to become an international player in the power game.

China's military has been quietly building up in the last decade. It's navy recently launched a new super aircraft carrier with nuclear armament.

There's no doubt that China could make a nuclear strike anywhere on the planet.

On Pakistan and India

These two countries are enemies. They both have nuclear bombs. They're both unpredictable. If it sounds like a recipe for disaster, it could be.

Is Armageddon around the corner?

The only thing I can say, is you better make the most of every day!

Time for me to walk on down the road...
Posted by ImBlogCrazy at 6:50 AM