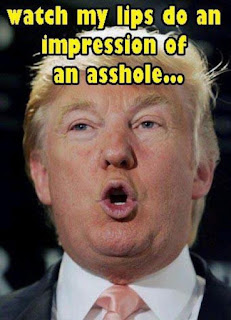 It's no secret that our Liar-In-Chief demands abject loyalty from his puppets.

Since he snuck in through the back door, the White House has been in chaos.

Most of Trump's original staff have been run off, or are in trouble due to the Russian investigation. Think Flynn for starters.

Like any other dictator, Donny wants "yes men" (I did say men; women aren't a factor in Trump's orbit (other than to grope).

Despite denials yesterday from Trump puppet Sarah Huckabee Sanders that Tillerson was on the way out, the White House - according to staffers - is preparing for the next upheaval in Trump's administration.

On deck for the next dumping is Secretary of State Rex W. Tillerson. No one will be surprised however. Tillerson himself has been saying he just wanted to get a year in before resigning.

But every since he called Trump a moron the rift between the two men has widened.

Mike Pompeo, the C.I.A. director, and one of Trump's favorite kiss-ass devotees, is slated to take Tillerson's place. It's not 100% locked in because the best choice would be Nikki R. Haley, the ambassador to the United Nations.

The only problem is she's not a pure puppet of the Donald. She actually has morals and a conscience which I suspect will disqualify her in the end.

Trump has surrounded himself with puppets his entire life. He's finding it to be more difficult as president because others are involved in some of the selection processes.

But the puppet master has not been deterred. He's already caused an historic turnover in the West Wing during his first year in office.

Tillerson's exit would make his time in office the shortest of any secretary of state whose tenure was not ended by a change in presidents in nearly 120 years.

The remaining puppets are like dogs eagerly waiting for their master to feed them.

For example, Sen.Tom Cotton who may be promoted to Pompeo's position in the shuffle, has been a dedicated puppet eagerly eating Trump's shit sandwiches since Day One.