Why Is Trump Getting A Pass on Sexual Harrassment During The Season of the Purge? 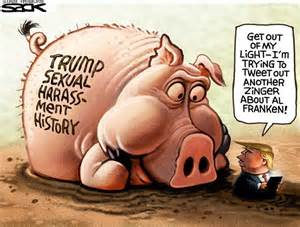 Sipping some good coffee this morning and wondering what Hollywood celebrity or politician will be called out as a sexual harasser today?

In the last two months hardly a day hasn't gone by without new accusations of men sexually harassing women in every workplace.

A seismic cultural tremor from Hollywood to Washington D.C., has shocked and disgusted many Americans.

Why now? Why not when Trump was accused by 14 women last year? In the current atmosphere of accusations how is it that Trump is getting a pass?

Every time the subject comes up Trump quickly deflects the conversation and says his accusers were lying.

Thus far, every case of sexual harassment filed this year has been aired out and repercussions have come from them. People are believing the victims now, a seismic change in itself, instead of the perpetrators.

Yesterday, the latest example was Matt Lauer who was accused of inappropriate sexual behavior, and fired on the spot. His co-hosts were shocked when the had to announce the news to viewers.

Also...Minnesota Public Radio confirmed Garrison Keillor had been fired, saying it received a single allegation of "inappropriate behavior" and doesn't know of any other similar allegations.

These two won't be the last famous, or wealthy men, to be accused. Bet on it. In the Season of the Purge, more men are going to lose their jobs, and people's respect.

How long this backlash, and purge, will go on is anyone's guess. Women are standing up for their rights and are fighting back against blatant sexism in the workplace, and everywhere else.

I read that since the Women's March on Washington the day after Trump was inaugurated, more women are seeking political positions in our government than ever before.

Women have the right idea.

You have to get in the system to change it. I hope this purge continues and grows so that someday Trump will pay for his sexual transgressions.