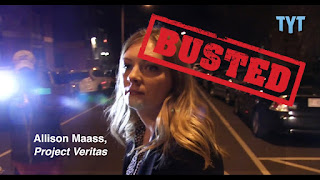 Project Veritas founder James O'Keefe hoped to pull off a sting story to help out pervert Roy Jones by discrediting the Post's reporting by trying to plant a fake story.

A woman, Allison Maass, met with Post reporters over the course of one week, spinning lies she hoped they'd publish.

It didn't work this time. But O'Keefe will continue trying to trick people into saying something that would help out right-wingers wherever they may be.

You could call Project Veritas a purveyor of fake news and you'd be 100% right. Maybe that's why Trump donated to the project one month before announcing his presidency.

Oh yeah...did you know about that?

If James O’Keefe respected the right-wing populists who make up the audience of Project Veritas, a nonprofit he founded to produce undercover videos skewering the left, he would tell them the truth about all of the organizations that he targets.

Instead, Project Veritas operates in bad faith, an attribute it demonstrated again this week in the aftermath of its bungled attempt to trick The Washington Post.

The premise that the newspaper spreads “fake news” is widely held on the populist right.

But the premise proved incorrect. Washington Post reporters did not reflexively or opportunistically believe a woman falsely accusing a prominent Republican.

If Project Veritas was operating in good faith—if it was really trying “to achieve a more moral and ethical society,” as it claims on its website—it would have acknowledged that its initial beliefs about The Washington Post were incorrect, and that the newspaper diligently pursued the truth when put to an undercover test.

But that will never happen. Instead O'Keefe is fundraising over his botched attempt to plant fake news. The sad part is people will send him money.