I Want to Hear the Whole News Story and Will Trump Win and Americans Lose On Proposed Tax Bill? 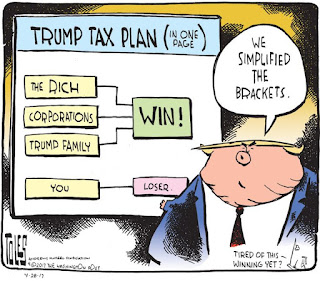 We all have our little quirks.

One of mine is being left with questions after reading a news story.

What happened to the who, what, where, when, why, that I was taught in journalism school?

A woman was shot and killed while out walking her dogs by a neighbor who thought she looked like a deer!
By the way, he shot her with a pistol. Who the hell hunts deer with pistols?

The capper, to me is it sounded like the guy was going to get away with killing her because it happened at dusk.

As any hunter knows, you're not supposed to be hunting at dusk. That's in the Hunter's Manuel.

What do you want to bet there's more to this story?

Now, I'm going to shift gears on you with the following observation:

If the Republicans pass a Tax Reform bill this week Americans are fucked!

Trump and his billionaire boys club (sometimes referred to as his cabinet) are going for the gold with this attempt at increasing their wealth.

Trump's family stands to make over a billion a year by just repealing the estate tax. It doesn't end there however.

The shell being passed off as a complete bill around Congress, eliminates most itemized deductions, including the state and local tax deduction.

But there's one more thing that concerns me.

If Trump gets a major legislation like this passed...we'll never hear the end of it. Three-fourths of the country will suffer while the wealthy will enter a new Gilded Age.

Trump's minions will have something to point to that he actually did. Any senators thinking about defying Trump will go out and buy knee pads to prove their loyalty after that.

The country's only hope is there's enough Republican senators with a conscience that listen to those who voted for them, and not follow the Trump party line for victory.

This is a crucial week as the senate tries to set the stage for a partisan win when they vote on the legislation.