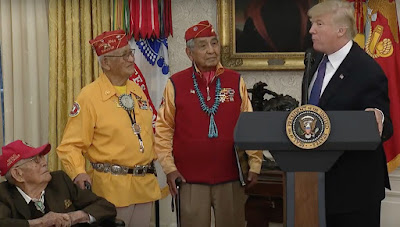 Have you ever had one of those mornings when you wake up feeling like you have a hangover, and you didn't even have a single drink the night before?

It's been happening to me a lot in the last 11 months. When I see Trump's name in the headlines - and they're always there - I realize it isn't a hangover. It's a living nightmare.

What else could you call our racist (and a long string of other expletives) president as he stood beneath a portrait of Andrew Jackson, and addressed the famous Navajos Code Talkers in a White House ceremony recently?

Did you happen to see it?

Trump acknowledged that Native-Americans were in America long before Europeans arrived (Chief of Staff Kelly made him say that).

Wasn't the part where Chump called Sen. Warren "Pocahontas" in a childish jab, a solemn moment? You could hear a pin drop as Donnie chuckled at his own joke.

When Trump finally turned to the veterans, he announced, "I like you!" like it was a benediction from the Pope.

I really like the part where they just stared back at him with no expression after his "heartfelt" declaration. I can only imagine what they thought of the clown in charge.

It was embarrassing watching a man who isn't even good enough to lick a veteran's boot be in the same room with those heroes and mock them.

Hell...it's embarrassing having to admit that an old lunatic is in charge of the country!