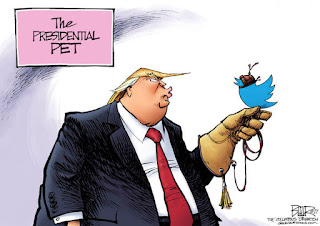 I really enjoyed the one where you stepped on your own tiny dick by claiming you fired Flynn "...because he lied to the vice-president and the FBI" about his discussions with Russia's ambassador last year.

This would mean that you knew Flynn had committed a serious crime when, according to the former FBI director James Comey, you asked him the next day to halt an FBI investigation into Flynn.

Your pathetic attempt to contain the fallout from the Saturday tweet by throwing one of your own lawyers under the bus is vile.

John Dowd, one of your many lawyers, fell on the grenade for you claiming he had composed that tweet and that it was “sloppy.”

The very idea that he wrote one of your official tweets, and broadcast it without you knowing, has jaws dropping in amazement among legal scholars and Democrats.

Multiple legal analysts have said your remark was the clearest indication so far that you tried to obstruct the various inquiries into possible collusion between Moscow and your corrupt campaign.

Other tweets (and comments) you've made could also put you in jeopardy of obstruction charges.

Several Republican senators have said you asked them to stop congressional inquiries into Russia’s interference in the 2016 election. Now, why would they say that?

Talk about desperation Donny boy; Dowd's sick defense was laughable, “The president cannot obstruct justice because he is the chief law enforcement officer under (the constitution’s Article II) and has every right to express his view of any case,” he told the Axios website.

Will someone please ring the Gong and tell Dowd to go back to lawyering school?

Laurence Tribe, a Harvard law professor, wrote: “Anyone who buys Trump’s lawyer’s alibi for his corruptly treacherous client is a complete fool.”

Richard Painter, who was chief ethics lawyer in the White House of George W Bush, said: “A lawyer who writes a tweet like that incriminating a client should be disbarred. He can tell Mueller he wrote it.”

Dowd’s denial that the president can obstruct justice carried echoes of Richard Nixon’s assertion, to David Frost in an interview in 1977, that “when the president does it, that means it is not illegal.”

Others experts pointed out that the articles of impeachment against Nixon opened with the charge that he “obstructed, and impeded the administration of justice.”

So, you go right on tweeting Donny. I can't wait to see how you're going to further incriminate yourself.