Will The IRS Ever Get Done With Auditing Trump's Tax Returns? 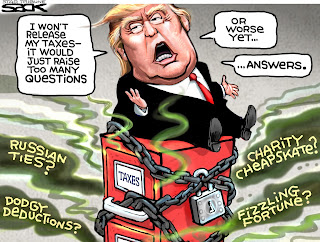 As soon as Trump slithered into office he made it known that he's not going to release his tax returns like every modern president before him.

His excuse was that his tax returns were being audited, which was just another Donny dodge.

The IRS said there's no problem releasing them now if Donny wants too.

Make no mistake; Donny never plans on sharing those documents because they could incriminate him.

At the very least, the public will know how much he and his family benefit from his proposed tax reforms.

To show how concerned Trump is about someone seeing his returns, he's instructed the IRS to provide even more security for them than they already had. Now a special safe houses his dark financial secrets.

People keep asking me how Trump can get away with doing things like this?

My answer is two-fold: he's being enabled by career politicians without souls, and financial backing from the Billionaire Boys club of America.

After extensive research on the IRS's methods of auditing, I discovered there is no set time limit.

Factor that in with the pressure Trump is keeping on the IRS  (which needs funding from him) and you have the perfect storm of corruption.

Based upon all of the above, it looks like Donny's audit will never end.

The only thing that can disrupt his corrupt intentions is if special counsel chairman Robert Mueller subpoena's them.

However, he might not get the chance, as Trump's minions are actively trying to get rid of him before the investigation goes any further.

Another sad reality in Trump's Amerika.