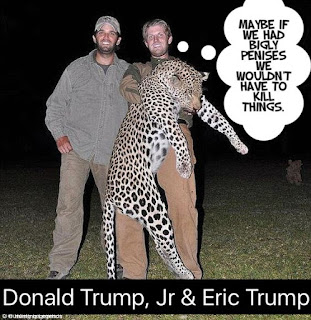 Once again Trump found an Obama policy to senselessly reverse.

Under President Obama's policy it was illegal to hunt endangered animals, and to bring home elephant tusks.

But Trump minions in the U.S. Fish and Wildlife Service met with a pro-trophy hunting lobbying group in Tanzania, and with Trump's blessings, tossed out any protection for the animals until 2018.

What happens then, I don't know. Maybe they figure there won't be any elephants or big cats left to hunt.

What really fries my grits is the argument the trophy-hunting trolls make to justify what they're doing.

They contend that it can help preserve wildlife by generating income for poor countries that can promote conservation and improve the lives of impoverished people.

Let's see now, by killing the elephants off the locals will get money to eat and buy supplies as long as the majestic creatures last? What happens then?

Yeah. That would be a new problem.

China, Singapore and the United States, have banned the trade in ivory for years in an effort to protect the dwindling herds.

Trump changed that, at least for a while, so his dumb offspring can bring back more than an elephant tail this time.

One more fact to consider, the money that comes into  Zimbabwe and Zambia won't necessarily make it to those who need it.

Both are unstable governments. As a matter of fact Zimbabwe is in the process of a coup as I write this.

The army in Zimbabwe has seized control of state TV, saying it's taking action to target what it calls criminals surrounding President Robert Mugabe.

What do you think will happen to any money coming in from trophy-hunters?

That whole thin argument collapses under the reality of the situation.

Trump mindlessly overturned another Obama policy for sheer spite, and for his two mentally-challenged children who shouldn't be running around with guns anyway!