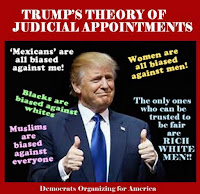 There was one thing I counting on when Trump got elected; it was our court system.

Despite numerous attempts to bypass the Constitution, Trump has been stumped by our court system numerous times.

The federal courts just shut down Trump's latest attempt to keep Muslims from entering the country by striking down his latest version of a travel ban.

The reason the judges keep turning Trump down is his own words on the subject of keeping Muslims out of America during the presidential campaign.

Trump enjoyed the campaign rallies where he was able to whip up racism and say whatever came into his small brain with abandon. With no adults watching his every move.

Reality has harshed Trump's high with repercussions in the real world. He's failed to ban Muslims.

Once again, on Thursday, a Federal judge overturned something Trump tried to get away with. Pardoning Maricopa County Sheriff Joe Arpaio.

US District Judge Susan Bolton said in her ruling that a presidential pardon may have granted Arpaio mercy, but not the power of "judicial record-keeping."

"The pardon undoubtedly spared defendant from any punishment that might otherwise have been imposed," Bolton wrote. "It did not, however, 'revise the historical facts' of this case."

Here's the deal; a presidential pardon does not remove a criminal conviction.

In her ruling, Bolton wrote that the purpose of a pardon was not to wipe a defendant's record clean or "blot out guilt," but to prevent further punishment for the crime and restore the his or her civil rights.

Trump ignored the normal protocol by granting Arpaio, who hadn't even been sentenced yet, a pardon.

In the real world you can't just ignore the typical Justice Department process.

Pardons are suppose to be requested through formal applications submitted to the Office of the Pardon Attorney at least five years after the applicant is sentenced.

There is one thing that concerns me, Trump has been appointing judges to our system. This doesn't bode well for the future of justice for everyone in America.