Sorry, There's No Good Choices for President in 2020 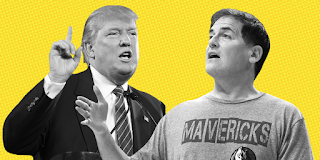 I'll get right to the point this morning, Americans are going to get screwed again when it comes to leadership!

The 2020 presidential election is just going to sink our government even deeper into the swamp. Get this:

Super mouth, Mark Cuban, thinks he'd make a good president. I'll give you a moment to vomit, and ponder that thought.

Using Trump as the bar, anyone could be president nowadays...as long as they're a billionaire using the politics of fear, and hate. Serial lying seems to work too.

Someone could probably qualify even if their a millionaire with good computer hackers on their team!

I had to chuckle when Cuban told reporters he's thinking about running as a Republican against Trump. Can you imagine the shit these two will throw at each other?

There's no doubt about it, watching two rich boys fight for the prize will make for good theatre. It would be Romper Room on steroids!

Here comes the part that really shakes me up; the Democrats don't even have a hint of a candidate in the wings for 2020.

I've heard Elizabeth Warren's name tossed about among progressives. But frankly, I don't think this country is ready to crack the glass ceiling and to elect a woman.

Not just because Hillary didn't get elected, but because of the rising tide of misogynistic foul mouthed racists in politics! You have to be blind not to see it.

Oh yeah. Then there's Bernie Sanders. He's announced he's going to run as an Independent. The chances of him winning (assuming you like him) are about as distant as landing the first man on Venus.

At this time, I don't see any hope of a savior to rescue our country. Two years, and counting...